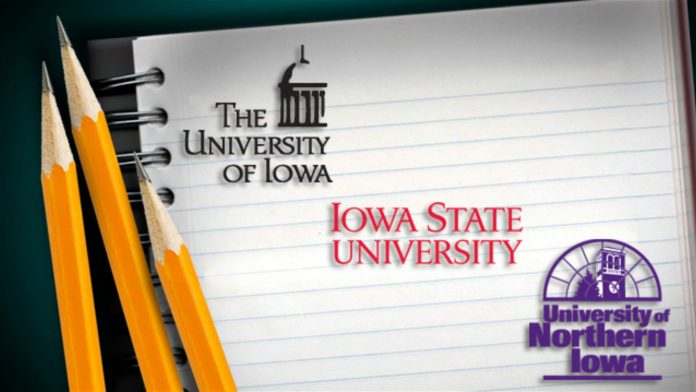 U of I occupies 1,900 acres in Iowa City. It’s the largest of the three public universities, with a Fall 2006 enrollment of almost 30,000 students.

The college was founded in 1858 and will celebrate it sesquicentennial next year. According to former Board of Regents President Mary Louise Petersen, “Many of our distinctive programs have their roots in the arts and humanities, where the U of I has long excelled.” In 2005, Professor Marilynne Robinson of the College of Liberal Arts and Sciences was awarded the Pulitzer Prize.

In 2006, U.S. News & World Report ranked the University of Iowa Hospitals and Clinics among the best hospitals in the nation – for the 17th consecutive year. In an article Ms. Petersen recently wrote for The Des Moines Register, she states: “The quality of U of I health care is directly linked to the university’s intertwined mission of education, research and service.

There is no question that the university is able to provide world-class care in part because of the research conducted in the Roy J. and Lucille A. Carver College of Medicine, one of nine outstanding U of I professional colleges (including business, dentistry, education, engineering, law, nursing, pharmacy, and public health.)”

According to Ms. Petersen, most of Iowa’s doctors, dentists, lawyers, pharmacists, and leading educators and engineers come from the U of I.

ISU is located in Ames and had a Fall 2006 enrollment of almost 25,500. The college was founded in 1858 and is known best for its agriculture, science, and engineering programs. It consists of eight colleges and 54 academic departments.

Currently, ISU’s Center for Agricultural and Rural Development is the largest university-based agricultural policy research institute in the United States. According to EconPhD.net, the university’s economics department ranks first in the world among agricultural economics programs. In 1937, the world’s first digital computer (the Atanasoff-Berry Computer) was invented at the college.

According to Robert Ray, who gave the December 2006 commencement address, ISU is home to one of the fastest, most powerful supercomputers in the world and the first six-sided virtual-reality facility. Mr. Ray also reported that the university is becoming a center of health-related research, developing new pharmaceuticals and determining links between nutrition and cancer prevention and treatment.

U.S. New & World Report ranked ISU in the top 50 public universities in the United States. And if academics are not enough, “The Campus as a Work of Art” book lists ISU among 25 of the most beautiful campuses in the nation.

UNI is the smallest of the three public universities, with a Fall 2006 enrollment of slightly less than 13,000 students. The Cedar Falls and Waterloo metro areas share UNI’s location, which occupies approximately 580 acres.

The school that was founded in 1876 was devoted to training teachers. Today it’s a comprehensive university that continues to excel in teacher education and graduate studies. In the early years, the curricula was designed to meet the needs of teachers at several levels: those who wished to teach in rural or elementary schools, those interested in teaching at the high school level, and those who intended to work in administrative positions.

In later years, the demand for courses beyond the bachelor’s level necessitated graduate courses, which began in 1952. In 1960, the Specialist in Education graduate degree was offered, which is a one-year of graduate study beyond the master’s level.

UNI now has five colleges, plus a graduate college. It boasts more than 360 graduates in math and science education since 1996, and its overall ranking is enviable. For nine years, U.S. New and World Report has named it one of the top two Midwest colleges of its type and one of the top 20 of all Midwest universities.

The Princeton Review rates its MBA program among the top 20%. Education Trust reports that it tops all peers in graduation rates.

The university seems particularly appealing because of its smaller size, making the transition from high school to college less difficult. It also clearly draws many native Iowans and successfully encourages graduates to remain in Iowa. Of its current students, 93% are Iowans; 67% of all alumni continue to live in Iowa.

Although all three universities excel in what they provide, there is very little duplication of services and competition for limited resources. Instead, they have a documented history of cooperation and complementary programming, something not often seen in states where there are multiple public universities.