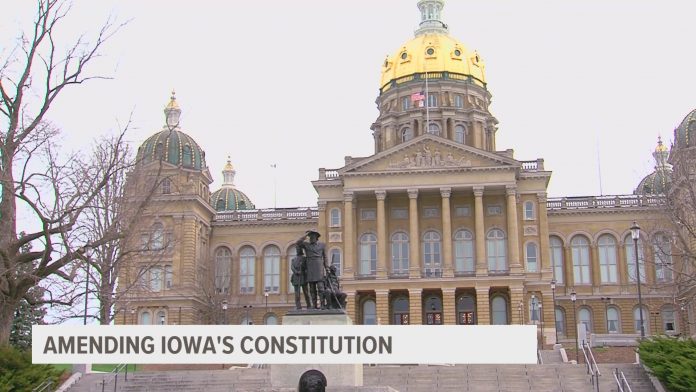 The state of Iowa’s constitution can be amended with simple majority Yeas approving the proposal. This barrier has to be met in both chambers of the legislature, meaning in the State House of Representatives and the State Senate.

Iowa’s constitution currently has fifty amendments as a part of the language contained within the document. Iowa is certainly one of the nineteen states that allow voting through referendum on constitutional amendments.

It is not a good thing in my judgment that the state does permit such a process because quite frankly I think most of the hot-button issues that would likely be brought to question by these ballot initiatives such as abortion rights, gay rights, and even assisted suicide are matters that deal with a minority of people and as many of the founding fathers were afraid of the liberty of a marginal set of people should not be trumped by an overzealous majority.

The legislation must be approved in two separate meetings of the legislature so hopefully that gives the occupants of office a little time to sit back and reflect on whether or not this is a good idea on whether to alter a document that has been around 1857.

In fact it’s really impressive that Iowa has only had two constitutions during its life span as a state with the one written in 1857 replacing the original 1846 covenant. Three of the fifty two amendments mentioned above have been struck as null and void by the Iowa Supreme Court.

A key power that was granted to Iowa’s governor was the line-item veto. Through this process the governor can strike spending out of appropriations bills or language that may be deemed unconstitutional in their mind at a later date.

Some governors like the former governor of Wisconsin Tommy Thompson who went overboard so much with the line-item that the people of the Badger State put a measure on the ballot rescinding some of the governor’s ability.

The governor has been striking specific letters, adding letters, even creating new words within legislation so the statutes wouldn’t do anything that he wasn’t comfortable with. The amendment restricting this power was named the Vanna White amendment, named after the Wheel A Fortune assistant due to the governor’s clever ways of turning letters around in order to do his bidding.

The reason this was brought up is that it is an example of how occasionally the people show a greater knowledge of what is reasonable and what is unreasonable when it comes to constitutional authority.

As far as an example of where the legislators of Iowa were wrong when it comes to the imitative process was the English Only referendum that was passed a few years back.

The voters did this through the legislative process by selecting legislators who felt the need to push a nativist agenda. and not through popular referendum which is something that is also used in twenty three other states. This is the process where people around collecting a certain number of signatures in order to get a measure placed on the ballot.

Once again I think this is a faulty process due to the high emotions that can often get the best of people when going into the voting booth. Unfortunately English Only amendments typically pass whether on ballot or through a legislative body.

Obviously the most popular subject for people to vote on through referendum right now is to define marriage as an act for one man and one woman to commit. It is quite likely that such a measure would also pass in Iowa, however it is doubtful that such a measure will be brought up with Pat Murphy of Dubuque as Speaker of the House and Mike Gronstal of Sioux City as the Senate Majority Leader with the Democrats now being control of both chambers of the legislature for the first time since nineteen sixty four.

This is because the supporters of this new majority would probably not be too prone to applaud such a maneuver. The people who hold the campaign dollars are the ones who push the agenda. Most bills go to die in the Rules Committee anyway or ends up getting discarded shortly there after say in the Education and Labor Committee just as an example.

I must say though that it would be interesting to see some of the ads that would be run for or against something in Iowa on the airwaves. Obviously a Governor Terry Brandstad or Tom Vilsack does not have the star power or camera savvy that a Governor Arnold Schwarzenegger does due to his background.

Of course as the text states and as we all already knew ever single one of Schwarzenegger’s policy wishes went down in flames including the one that was the least controversial in my eyes being the question on whether to allow unions to use union dues for political activity without the written permission of their members.

Unions are still a fairly effect political entity in this nation despite the fact that they have shrunken in size and lost much of their luster since the 1970’s consistently to today.

Vivid images from the Cable News Network of the Governator shooting t-shirts from a bazooka into crowds urging support of his imitative still stick out in my mind. So even with the high rollers, movie stars that can come out for or against something when it comes to ballot initiatives it can either have a positive, negative or little effect all depending on how contentious the matter that is being voted on is.

Some of these issues that find their way to the voters hands you would thing would go for granted such as the one in Montana that permitted hunting, fishing and trapping. There was a controversy here in Iowa in 2004 if memory serves me right that deal with removing the word insane from the Constitution because it was viewed by many as uncompassionate in reference to the mentally handicapped in terms of the provision outlining who can and cannot vote here in the state.

The whole thing became a tool for partisan rancor because the Republicans in the legislature said then Secretary of State Chet Culver (now Governor Culver) fell asleep at the wheel as far as getting something to address the matter onto the ballot.