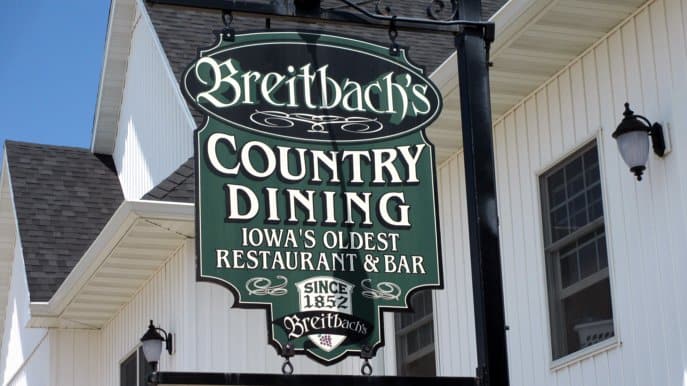 Breitbach’s is located in Balltown, Iowa. Breitbach’s is Iowa’s Oldest Bar and Restaurant. Breitbach’s was first opened in 1852 by Jacob Breitbach and now operated by the sixth generations of Breitbach’s. Breitbach’s operated within it’s original structure until December 24, 2007 when it was destroyed by fire.

After the December 24, 2007 fire, the Breitbach family, small community and people who visited Breitbach’s regularly came together and rebuilt Breitbach’s. The rebuilding took about six months.

People came from Iowa, Wisconsin, Minnesota, Illinois and other states to enjoy dining at Breitbach’s again. Fire would strike again on October 24, 2008. The difficult choice to rebuild was announced just before Christmas 2008. Breitbach’s was opened after the second fire on August 1, 2009.

Unlike most restaurants, Breitbach’s prepares all their food fresh with home style cooking. Breitbach’s offers a full menu of items including steak, chicken, prime ribs, as well as great homemade desserts. Breitbach’s offers breakfast, lunch and dinner buffets with a wide variety of foods freshly made each day.

The main courses offer chicken, ham, potatoes, corn, beans and other main course items, along with fresh baked rolls and a variety of desserts.

The value of the meal at Breitbach’s is a great value. You definitely get what you pay for and then some.

I would recommend Breitbach’s to my family, friends and you. It’s definitely a place to go for a date, a family get together or a place to enjoy time with friends. A place anyone passing through Northeast Iowa should enjoy.

The drive to Breitbach’s is very scenic and breathtaking in spots. It’s a good idea to bring along a camera and allow some extra time.