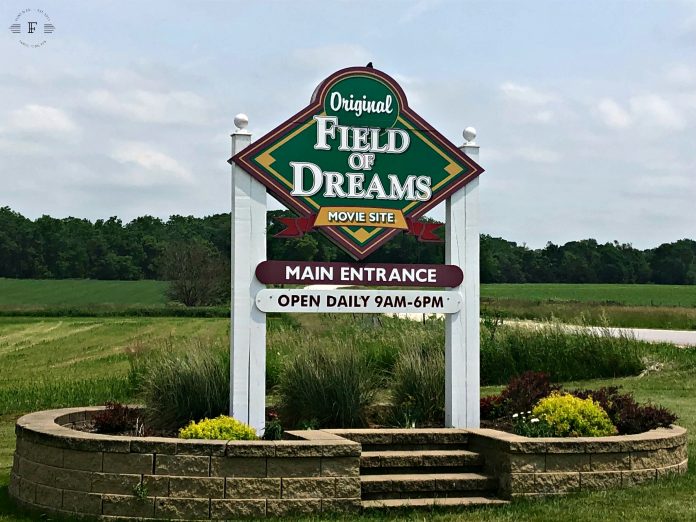 Outside of Iowa, Dyersville is mostly known for its “Field of Dreams,” the baseball diamond cut out of a cornfield and the centerpiece of the 1989 film starring Kevin Costner.

However, after we decided to make the baseball pilgrimage to Dyersville, we learned that the community of 4,000 founded in 1848 offers much more than a movie icon to draw travelers to the self-proclaimed “Farm Toy Capital of the World.”

First thing you need to know about visiting Dyersville is to take the Dyersville exit off of U.S. 20 on the south side of the town onto Iowa 136 (Ninth Street Southeast locally).

If You Build It They Will Come

To get to the Field of Dreams, follow 136 north through town, turning east on Third Avenue Northeast, which in turn becomes 12th Avenue Northeast, then Dyersville East Road. Follow it to Lansing Road, which will take you to the movie site. Admission is free.

A piece of trivia we learned while at the baseball field is that the famous scene from the movie with the dialogue: “Is this Heaven?” “No, It’s Iowa.” was a spur-of-the-moment idea that occurred after fog enveloped the field. It was not in the original script. Some improv, eh?

Don’t forget to take your baseball bat, a ball and glove when you go. Several families were playing on the field when we arrived. Dads were pitching to sons or daughters, while other family members stood out in the field shagging fly balls.

After stocking up on souvenirs at one of the two concession stands, return to Dyersville the way you came.

Only about 50 exist in the United States and one is in downtown Dyersville: the Basilica of St. Francis Xavier at 104 Third Street Southwest. The twin-spired church of Gothic architecture features 64 stained glass windows. The church was named a basilica by Pope Pius XII in the late 1950s.

Built in 1888, the basilica is on the National Register of Historic Places. The two steeples stand more than 200 feet tall and the crosses on the top are another 14 feet.

Toy Museums for Both Boys and Girls

Dyersville is home to a pair of museums that should interest both the young and the young-at-heart.
One is the Dyer-Botsford Doll Museum at 331 First Avenue East. Housed in the historic home of Dyersville founder James J. Dyer, the museum exhibits more than 1,200 dolls and includes a rare revolving German Christmas tree. The museum is open seven days a week May through November.

The farm toy museum houses more than 30,000 toys on its two floors. It is open seven days a week. Admission is charged.

This museum, along with no less than three farm toy manufacturers calling Dyersville home, gives the town the undisputed title of the “National Farm Toy Capital of the World.”

RC2 (formerly Racing Champions Ertl), Scale Models and SpecCast all have facilities in this Iowa community and at least four outlet shops are available to pick up a small tractor as a memento of your visit to Dyersville.