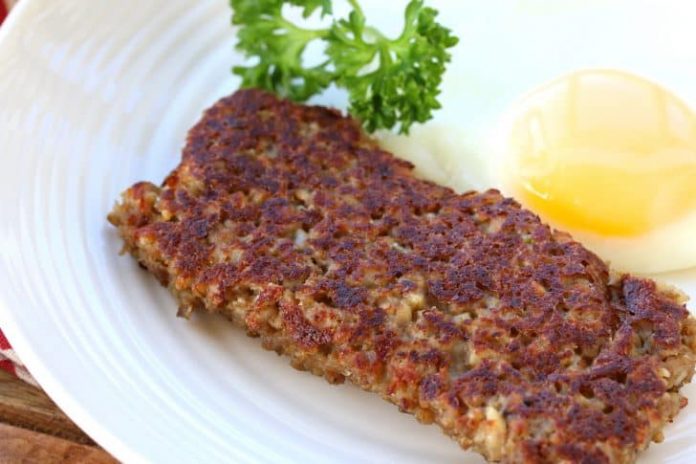 There may be Cincinnati natives who don’t like goetta, but I think we all know that goetta is the traditional breakfast sausage of Cincinnati.

Goetta (pronounced geh-tah) is a mixture of pork and beef with steelcut oats, barley and seasonings that is molded into a sausage. You can buy it in a rectangular block shape or sausage roll shape.

Goetta most likely came from the large population of German immigrants in the late 1800’s around Cincinnati and northern Kentucky. It was created with ground pork and it is said that oats and barley were added to be filler and expand the amount of the dish. Back in the 1800’s Cincinnati was known for its pork manufacturing. In fact Cincinnati’s nickname was Porkopolis. That’s why our city’s marathon is the Flying Pig.

How We Fix It

We fry it in a skillet until crispy on the outside but a little soft on the inside. You have to watch out for popping grains when you cook it.

My husband and I like it with eggs or pancakes. We don’t put anything on it but I know someone who likes maple syrup on their goetta. We have a few restaurants around town that serve goetta. But most do not and I know some people who like finding goetta on the menu.

Northern Kentucky right across the Ohio River has a Goettafest every summer. You can get goetta on pizza and goetta sandwiches and lots of dishes that include goetta.

The original is greasy like bacon. But there is now a lowfat turkey version that I have not tried. The largest producer is Glier’s Meats located across the river in Covington Kentucky. It was begun in the 1940’s by Robert Glier whose family owned a meat company. Goetta has a unique flavor and texture. I hear it is compared to another breakfast meat called scrapple.

The smell of coffee and eggs and goetta in the morning is great.