IowalumA Q&A blog Shared by Iowa Students & People
Home General Knowledge What’s in a Name? How Broad is a Broadsheet? 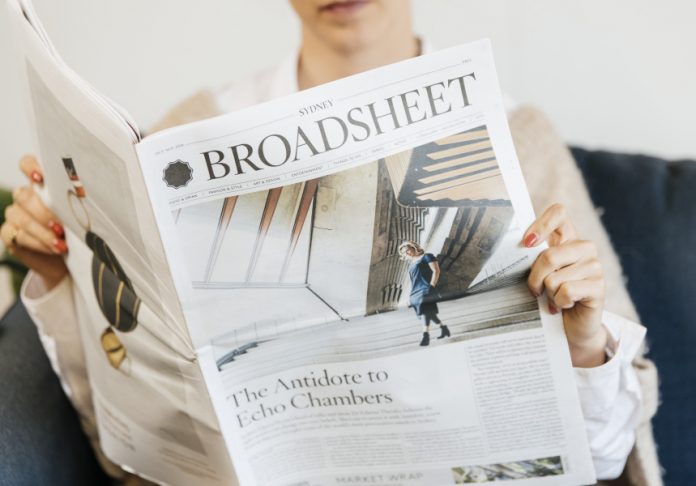 Broadsheet. Ah, what a beautiful name. It brings back so many memories of a vibrant, bustling, healthy newspaper business. Broadsheet…That’s what full-size newspapers are called, were called…used to be called. It’s kind of difficult to really put your finger on the definition these days since so many broadsheet newspapers are not-so-broad anymore. And many are smaller or larger than their neighbors…all of this downsizing done as a way of cutting costs.

That bastion of journalism, The New York Times — The Gray Lady — cut the size of its newspaper in 2007 from 13.5 inches wide to 12 inches. Then a year later it cut back the size again by one-and-a-half inches and looked to save about $42 million, in conjunction with other cost-cutting measures.

Cutting Costs is Not New

Many years ago The Times was looking to save a few bucks in the cost of ink by eliminating the period at the end of its name on page one. At the end of a full-year, without the period in its name, the corporation saved a whopping…$46 in ink.

As with anything today, many of the things we’ve grown up with in this business have changed and are continuing to change literally before our eyes. The name “broadsheet” is still used for what we now call full-size newspapers — The Times, The Philadelphia Inquirer, The Washington Post, and so on — all of which have six columns as standard.

The Evening News out of Newark, N.J., was physically a very large newspaper. Its template employed nine columns as standard.

Apparently it wanted to show the newspaper world that it could handle any kind of news at the same time. As far as I know it was the only paper that was so huge. Many journals today, calling themselves broadsheet, are anything but broad and none approach the size of The Evening News..

The most common format today for full-size newspapers is 17 by 22 inches, which is also the size used for lots of advertising fliers.

“Broadsheet” is the term used in printing for the finished size or the standard size for a printed publication. Typically a full-size newspaper in North America is up to 12 inches wide and about 20 inches long.

Broadsheets Separate Themselves from the Herd

Full-size papers try every way possible to disassociate themselves from “tabloids” which, in recent years, have been associated with news stories considered “tacky” and “offensive,” the style of which has been dubbed “tabloid journalism.” But tabloid refers to the size of the paper, not to the journalistic bent of the publication.

A tab is 11 by 17 inches with five columns and is smaller and narrower than a broadsheet newspaper. Sleazy journals are printed in the tabloid style because it’s easier for their largely blue-collar audiences to handle on the bus or subway, thus giving birth to “tabloid journalism.”

However, readers of the New York Daily News, for example, would take offense if their publication was put in the same league as The National Examiner or the infamous The National Enquirer.