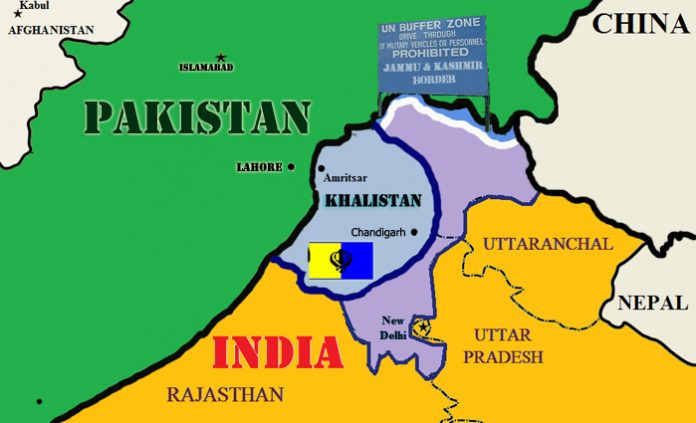 South Asia has a huge number of ethnic and religious minorities and many of them want independence. They want their own country, focused on them as an ethnic group. In the second half of the 20th Century, one of the most notable of those groups are the Sikhs of India’s Punjab region.

The Idea of Khalistan

If it was ever achieved, it would take up parts of the current India states of Punjab, Haryana, Himachal Pardesh, Rajasthan and Uttar Pardesh. Khalistan was envisioned by Dr. Chauhan as a theocracy, a religious state based on Sikh religious principles.

While the name “Khalistan” originated with Dr. Chauhan, the idea of an independent Sikh state is not at all new. Gobind Singh (1666-1708 AD) was the last Sikh Guru. He managed to effectively started a Sikh state in 1699 when he created the Sikh Commonwealth (the Khalsa Panth) which Sikhs entered when they undertake a religious ceremony called the Amrit.

An independent Sikh state existed until 1849 on the Indian sub-continent. In Colonial times the capital of the Sikh state was Lahore, which is now in Pakistan. Sikh separatists today seem content to confine their struggle to India. That sometimes leads to allegations that Sikh militants are supported by the Pakistani government.

The political organization of Sikhs into a community separate from neighboring Hindus traces its origins to 1606 when the fifth Sikh Guru, Arjan Dev, was murdered. There are about 25 million Sikhs worldwide. Over 80% of them live in India, and 75% of India’s Sikhs live in Punjab. The majority of Sikhs outside India live in America, the United Kingdom, and other former British colonies.

In the 1970s, North India saw growing tension and communal violence between Sikhs and Hindus. Sikh activists began a series of civil disobedience campaigns in 1982. During that time over 100,000 Sikhs were imprisoned. These campaigns brought international embarrassment to the Indira Ghandi’s Indian government and greatly overloaded the nation’s prison system.

In response to the Sikh problem, Indira Ghandi’s government implemented Operation Blue Star in 1984. The operation replaced police and paramilitary forces in the Punjab with regular military forces. The end result was that about 250 Sikh militants barricaded themselves in the Golden Temple (the Sikh religion’s holiest shrine) in Amritsar. About 6,000 Indian troops died retaking the temple.

The Future of Khalistan

The idea of Khalistan has did not fade after operation Blue Star. In June of 2001, Dr. Chauhan was allowed to return to India from exile. The Indian government’s willingness to tolerate him caused much speculation among human rights organization and political pundits about the future of Khalistan. Chauhan did not advocate armed rebellion as a means of creating the state.

With Dr. Chauhan’s death in 2007, the idea of Khalistan may soon become a historical footnote in Sikh history. But the larger idea of an independent Sikh state is unlikely to disappear completely.