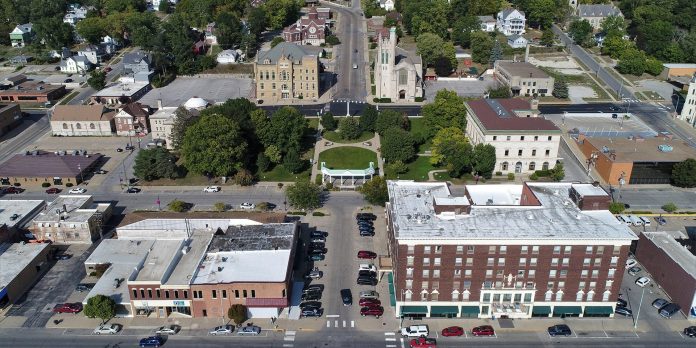 Ottumwa, Iowa sits on the Des Moines River, with easy passage from the north to the south side of the city. There’s no need to separate the city into two parts for restaurant purposes other than to help people find those close to their homes or hotels. And there are many choices.

The north side of town has city hall, the courthouse, and the public library, plus one of the two downtown business districts. With most of the law offices and government buildings, there are many people ducking out for a quick lunch.

It is not possible to talk about eating spots in Ottumwa without mentioning The Canteen Lunch in the Alley, at 112 East 2nd Street. Since the late 1930s the Canteen has been serving lunch into the late afternoon. The only seating is at stools at the counter, but it’s worth the wait for the loose meat sandwiches and pie. The city parking garage was literally built around this landmark.

Not really in the business district is the Sonic Drive In, 222 North Wapello Street. It’s the closest eatery to the America Inn, and is actually on Route 63 North, just after you cross the Wapello Street Bridge. The Second Street Cafe is in the Hotel Ottumwa, at 107 East 2nd Street.

It’s open from early morning until late evening and serves breakfast all day. It recently went smoke-free. If you want smoke, go to the Tom-Tom Tap, also in the hotel. You can order sandwiches at the bar.

For home cooking you can’t beat Julia’s, which is at 529 West Main Street. It’s always open for breakfast and lunch and sometimes has dinner hours. Check out the walls, which have many older Ottumwa signs or other memorabilia.

Very close to Route 63 is the Courtside Bar & Grill (2511 North Court Street, near the Hy-Vee Grocery Store). Sandwiches and salads are terrific and there are several TVs.

It’s smoke-free, with an outdoor patio for those who must imbibe. Until early evening it has the character of a family restaurant. Later in the evening it becomes more of a true sports bar, complete with pool tables that can be the site of league play.

There are many other places to eat. The North and South Hy-Vee grocery stores have large dining sections and are especially popular for breakfast on the weekends.

Ottumwa Regional Health Center and Indian Hills Community College have cafeterias with very reasonable prices. This being the midwest, almost every Friday night one of the many churches is likely to have a soup supper and the Knights of Columbus Hall will have a fish fry. If you aren’t sure where to eat, step outside your car and follow your nose.

What is Cyberbullying? The Growing Threat of Electronic Bullying and Harassment

Sue Allen - October 15, 2021 0
Parents are concerned about their children's online safety, and most parents take action to safeguard them from dangerous adult predators. However, youths are subjected...

Basics of Buddhism – What is the Buddhist Attitude of Mind

What is the Difference Between the AV and STV Electoral Systems?

What is Whipped Cream? Easiest way to make whipped cream at...

What is a Pallet Racking Storage System?