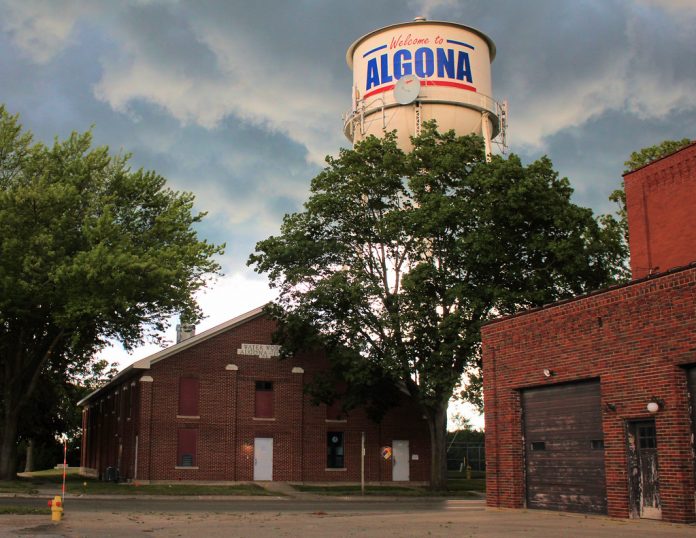 Located in the northwest quadrant of Iowa, the city of Algona is a perfect blend of undulating heavily wooded hills, fertile farmland, meandering river and unique history. It is also home to a distinctive holiday attraction that was born out of a soldier’s desperation and longing.

Beginning in April 1944 through February 1946, Algona was the site of a large Prisoners of War camp that housed both German and Italian soldiers.

The 14,000 square foot “Camp Algona P.O.W. Museum” pays tribute to the 10,000 men and women who were prisoners as well as those Americans that worked within the prison walls.

The museum’s permanent exhibits are; “German P.O.W.s in America: “The Camp Algona Experience”, “You Must Remember This”, “Cultural Expressions behind Barbed Wire”, and the “Algona Experiences WW2.”

The “Cultural Expressions behind Barbed Wire” exhibit is a remarkable expression of the resilience of the human spirit. It contains countless original pieces of art, woodworking, theater productions and writings that were completed by the German and Italian prisoners. The craftsmanship in the pieces is exquisite.

Part of the notable creations that came from that dark period is the “Algona Nativity Display” which is now cared for by the “First United Methodist Men’s Club of Algona.”

As of now the “Camp Algona P.O.W. Museum” is open during the months of April through December on Saturdays and Sundays from 1:00 pm until 4:00 pm. The museum is closed during the week as well as the entire months of January through March. Admission is $3.00 per person for those over age 10. Children under 10 years of age are admitted free.

Created out of a German prisoner’s desperation and longing for home, the “Algona Nativity Scene” is a remarkable piece of art.

The nativity scene, consisting of 60 one-half life sized realistic figurines was constructed by Eduard Kaib and five of his countrymen back in winter 1945.

Originally an architect by trade, Kaib found himself imprisoned at Algona shortly after the fall of 1944. As the Christmas holidays approached he became so homesick that he fashioned a small nativity scene out of the dirt found in the prison yard. He lovingly sculpted the soil figures and baked them in the oven until they hardened.

Once the mini-figures were complete they caught the eye of then Camp Commander Arthur Lobdell. Commander Lobdell, so enamored by the display, later met with prisoner Kaib and asked him to create a large scale version of the pieces.

Kaib, along with several of his countrymen, obliged Lobdell’s request constructing the nearly life sized figurines out of wire encased with concrete and finished with plaster. The plaster finish was then hard carved to a state of realism that is awe inspiring.

Commander Lobdell placed the finished figures in a display located just west of the camp so that all of Algona’s residents could view the pieces.

When the war ended Kaib donated the figurines to Algona and then returned to Bielefield, Germany where he later passed away in May 1988.

The prisoner’s nativity display is available for viewing at the Kossuth County Fairground beginning the first Sunday in December and running through New Year’s Eve. During that time period it is open Monday through Saturday from 2:00 pm until 9:00 pm and on Sundays and Christmas Day from Noon until 9:00 pm.

It is also available for viewing by appointment. Those wishing to make an appointment to see the display should call the First United Methodist church’s office at 515-295-7241.

Nestled within the 144 acres of the “Lake Smith Wildlife Area” is “Lake Smith” and the new “Water’s Edge Nature Center.”

The “Water’s Edge Nature Center” overlooks the lake and features self-guided educational displays, wildlife viewing observation areas, and hiking trails. There are also opportunities for swimming and fishing in “Lake Smith” itself.

The center’s hours of operation vary so it is best to call in advance of one’s trip to avoid disappointments.

Those wishing to learn more about “Ambrose A. Call State Park” should contact the Iowa Department of Natural Resources via phone or on-line.