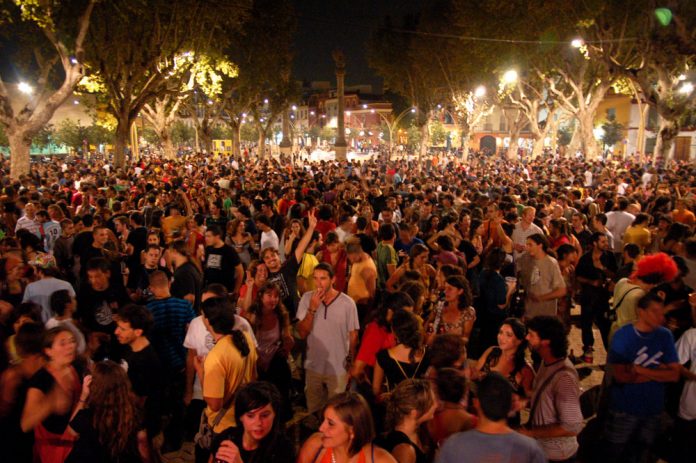 18Bottelones were conquering Central Europe and beyond this summer. Starting in Spain, it spread and grew. Internet was the key to success. But what is a botellon?

It all began in Spain, when some young people decided they needed a drink and this preferably out of their parents’ watching eyes. They pulled together a few friends and collected even more bottles of alcohol and went together into a park for a binge. That was still quite low key and a minor affair. Somebody caught up on the idea and started thinking big.

The internet then made it possible that the first real botellon was attended by several hundred young people and several thousand bottles. The botellon was born. It is a drinking party exclusively for young people. It was organised and executed within a few days at most; people had been informed either through internet blogs and e-mails or by mobile phone.

Parents all over the continent fell into a collective swoon as soon as this newest fad reached their hometowns and their children accordingly went out on a binge. But just why these parents reacted that way is puzzling, at least to me. I remember quite well, at that age we had some spiffing good drinking parties. And I remember several of these swooning parents being present at these same parties as well. Some people seem to get old and forgetful before their time, or at least they behave that way.

As one sociologist put it quite succinctly, it’s preferable that children go out on a binge with their friends and people in their own age group where they may look after each other, instead of alone in a seedy bar somewhere with equally seedy grown-ups. Drinking wasn’t actually all that heavy, the fun was much more important. At least, local hospitals in those cities hit by a botellon had only occasional casualties to treat.

The littering though was quite another thing. The clean-up operations by the cities on the day after were quite extensive. But seemingly the young peoples’ parents forgot something in their upbringing. Or maybe it is just too difficult for them to tell their children not to litter. Throwing bottles and hankies out of the car window on the way to family holidays is maybe not the key model behaviour we are looking for there.

As the botellones spread through the continent, they became bigger and bigger. This growth was mainly due to the hue and cry of media coverage a day or two before a botellon was going to be held. Due to this press coverage the relevant addresses of the organising blog owners were known and accessible to thousands of teenagers who never would have heard of the binge otherwise.

To future organisers of botellones I just want to say: If you organise something, do it right. Getting together a few people and a few bottles is not that hard. Finding a way to get rid of bottles and other litter is part of the organising as well. If you can’t manage that little bit as well, you’re a looser.

Teenagers going to a botellon I would advise to take their friends along; it’s much more fun and there is always safety in numbers especially on the dark way home. And parents should just let them go. A good binge with a whopping headache the next day is a good prevention against regular drinking. It was for me at least. Maybe parents could remember from time to time that once they were young, too, even when that was in the last millennium.