IowalumA Q&A blog shared by Iowa students
Home Nature What is a Dugong? The Habitat and Lifestyle of This Gentle Sirenian 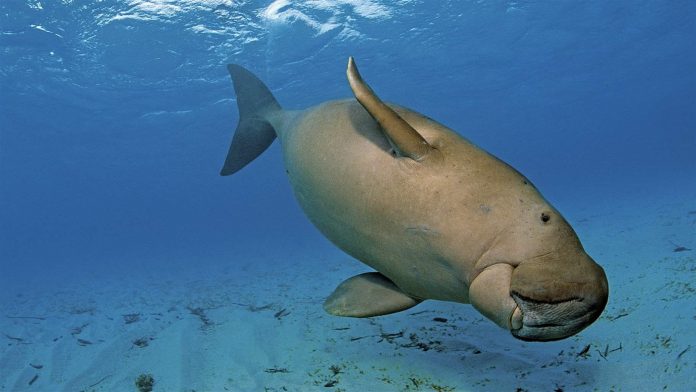 The dugong (Dugong dugon), nicknamed the “sea pig” or “sea cow” is currently the only member of the family Dugongidae, of the order Sirenia. It resembles the other sirenians, which include the three species of manatee and the now-extinct Steller’s sea cow, formerly of the North Pacific, which was the other species within the Dugongidae family.

The dugong is large, up to 12 feet in length and weighing up to 1,000 pounds. It has a plump, round body tapered at both the front and back ends, with smooth, hairless skin. It has a square, bristly snout, two front flippers, and a tail shaped like a whale’s.

Where the Dugong Lives

The dugong can be found in shallow, coastal areas of tropical regions, such as the east coast of Africa, up into to the Red Sea, around the coasts of India and China, to Indonesia and the Philippine islands, and southward to New Guinea and northern Australia. It will stay in waters that aren’t more than 30 feet deep.

This mammal spends all of its time in the water and does not venture onto land. It prefers to be solitary, but if the water gets too cool, a herd of dugongs will gather together in warmer water. Sometimes the dugong will pair with another individual, and this is especially the case with mother and calf, since the calf will stay with her for several years.

Feeding and Other Habits of the Dugong

The main diet of the dugong is algae and marine grasses. It moves slowly and lazily, feeding day and night, consuming up to 70 pounds of aquatic plants each day. Like the manatee, it is the only sea mammal that is a complete vegetarian.

The dugong will dig up its favorite sea grass with its snout, shake off the sand and stack the plants in calm water near shore. It will “walk” on its fins along the sea bottom, leaving a distinctive trail. When resting, the dugong will “stand” on its tail, keeping its head out of the water. While diving the dugong must surface to breathe, and does so every two to three minutes, but it can stay under water as long as 10 minutes.

A shy animal, the dugong will stay away from humans, and can be seen when it surfaces to breathe or when the male dugong displays during mating season. He will thrust himself out of the water and land backwards with a splash, to impress his mate.

The Dugong is a Vulnerable Species

Like the other sirenians, the dugong has been hunted throughout history for its blubber and oil.

The dugong’s hide was also a precious commodity. Large-scale hunting was stopped after the mid-twentieth century, but today it is pollution, and danger from boat propellers and fishing nets, that threaten the dugong.

Some scientists estimate there are only around 30,000 dugongs left in the world, and know that they have already disappeared from some areas they formerly inhabited. Some conservation groups have set up reserves where dugongs can live and breed in safety, and where people can learn more about these gentle sea mammals.