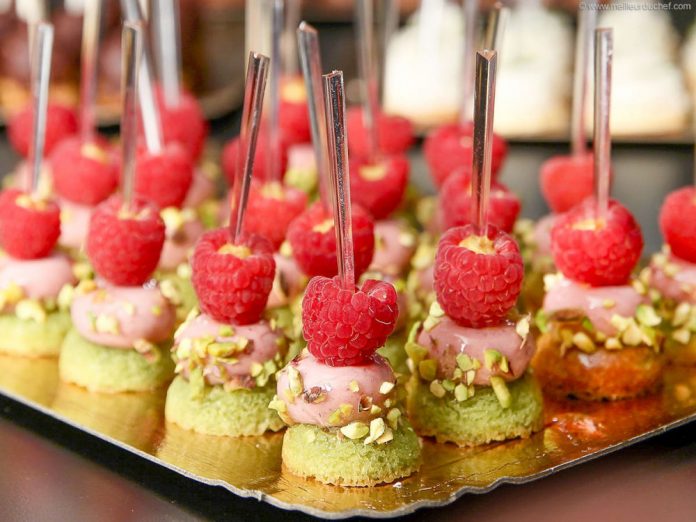 The ways the names of terms relating to the cooking and serving of French-based foods are used keep evolving as global cuisines and habits make inroads into traditional French fare and set eating patterns. To anchor this point, before tackling the subject of the mignardise, let’s briefly take the examples of the mise en bouche, amuse-bouche and hors d’oeuvre.

Formerly, in the 19th century, the first term denoted a pre-prandial nibble, while the third was a starter served before the soup. Amuse-bouche is a later (late 20th century) term – more about it below – which nowadays is increasingly also being used interchangeably with mise en bouche and hors d’oeuvre as ways to describe aperitif food.

In French-speaking Europe today, restaurants as long established as Paris’s Tour d’Argent (founded 1582) to late 20th century bastions of haute cuisine like the two-Michelin-star Domaine de Châteauvieux in Geneva, Switzerland, tend to avoid the term hors d’oeuvre as a synonym for starter on the menu. It is now used almost exclusively to denote pre-prandial nibbles and no longer appears on restaurant menus at all.

At table, hors d’oeuvre (‘’ore duh vrah’’; the term is also used in English, and there is no ‘s’ in the plural form) has been replaced by the word entrée, now that the classic structure for a non-tasting menu consists of a starter (entrée), a plat principal (main course) and a dessert, with the option of having a cheese course in between the main dish and the sweet.

Different Uses Of The Terms Mise En Bouche And Amuse-Bouche

Although you still frequently see mise en bouche (‘’meeze on boosh’’, also used in English) for aperitif food, many prefer to say hors d’oeuvre because everyone understands that. It also avoids confusion because mise en bouche is a wine tasting term: before an official tasting begins, all tasters will be given the same wine – a mise en bouche – so that their palates start from the same place.

The same holds for amuse-bouche (‘’ahm-üz-boosh’’, also used in English): more and more, amuse-bouche is used for all aperitif food, yet many will not use it that way to avoid confusion as its primary meaning is the complimentary, surprise, bite-size pre-starter to a meal offered to each diner on a plate at table usually only by higher-end French (or Frenchified) restaurants.


And Now For The Mignardise

Tackling the French-style meal from the other side the very end – we come to the matter of the mignardise. Mignardises (‘’me-nee-are-deeze’’, also used in English) always include petits fours (‘’peh-tee-foor’’ – our illustration), and like today’s amuse-bouche they are on the house but only in the toniest of venues where they are served with demitasse coffee after dessert.

An assortment of post-prandial mignardises (from mignard, which is not only applied to food and means gracious, pretty, sweet but can also connote affectation) usually includes house-made chocolates, little cubes of pate de fruit, and so on.

Mignardises are sometimes called friandises (‘’free-on-deeze’’). Friandise is the French word for treat, and is by no means exclusively applied to this sort of treat: a friandise pour chien, for example, is a dog treat.

Petits fours have traditionally been served (albeit not gratis) towards the end of elegant receptions and cocktail buffets, and still are although more and more caterers no longer use the term and describe all small sweet reception foods as mignardises, friandises, or amuse-bouches sucrés.

In a nutshell, when heading and closing a fancy meal both the amuse-bouche and mignardises are little, on-the-house surprises.

However, if the words are applied to reception foods, amuse-bouche (salé) means savory finger food – unless followed by the word sucré, at which point it becomes identical with a mignardise, which is to say sweet finger food.