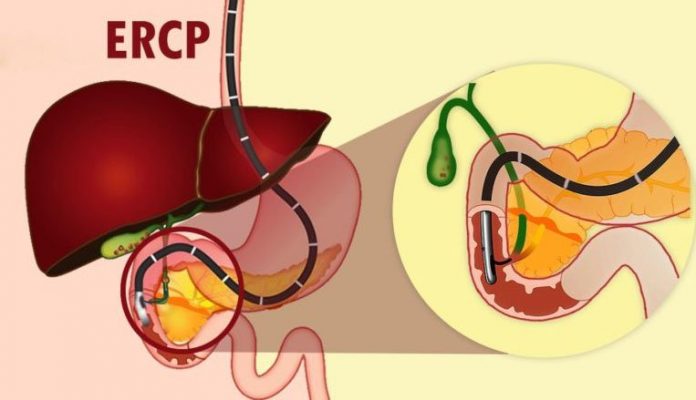 Ercp is a gastroenterology procedure done to examine the common bile duct and provide therapeutic treatment of any disorders discovered.

A person comes to the hospital with sudden abdomen pain. Another called his doctor to find out why he has become  yellow all over and itchy over the last two days. Yet another has been diagnosed, like Patrick Swayze, with deadly pancreatic cancer.  All of these are reasons your doctor might send, or refer, you to a gastroenterologist.

After an examination, and some lab work coupled with other diagnostics,  the doctor might recommend undergoing an ERCP.

Ercp is a shorter term for a common endoscopy procedure: endoscopic retrograde cholangiopancreatography. This exam is both diagnostic and therapeutic, meaning  it is used to discover disease processes and to treat them.

Despite the larga and ominous name, ercp is not a difficult test to undergo.  Although many are already patients in the hospital, ERcp can be done as an outpatient, and one can go home a few hours after having it done.

Here is what goes on inside the body. When a person eats food, the process of digestion is activated. The liver and pancreas create substances that will break down foods for the body to use as energy. While the pancreas secretes chemicals to break down carbohydrates and fats, the liver makes bile salts which are stored in the gallbladder until needed.

Bile salts bind to fats in food so that they may dissolve into the water of the bloodstream. These substances are delivered to the small intestine via a channel called the common bile duct.

During an Ercp, a patient is given anesthesia to remain safe and comfortably sedated for the procedure. Due to the technical difficulty of the test for the doctor- we are all created differently- the procedure can last from ten minute to two hours.  Two methods of visualizing what is going on with the patient are used: a video endoscope and xrays.

The endoscope is passed through the mouth to the stomach and beyond, where the outlet of the common duct lies. The muscle guarding the entrance is known as the sphincter of Oddi.

Once at this area, the doctor will pass a small catheter millimeters wide with a wire loaded within it through the sphincter. The tip of the catheter will enter the common duct or pancreatic duct. Once  in the common duct, the physician  will push the wire up through the duct into the large tributaries within the liver.

Contrast dye  is injected slowly to allow x ray visualization  of the duct. Findings include swollen ducts, narrow strictures, gallstones outside of the gallbladder,  or even masses.

Often, a sphincterotomy is performed by the doctor. A sphincterotomy is a fancy term for making a cut into the outlet of the duct. This involves using a tiny cutting wire that is part of the catheter, and an electric current that will cut through the tissues. Again, the overall length is typically one or two millimeters. This will allow the contents of the ducts to flow out freely. For the jaundiced person in the example above, this will relieve the symptoms.

Should gallstones be noted, and this is very commonly the culprit for abdominal pain, the contrast injection will show the physician where they are.

There are several ways to remove them, but the first  item used is a balloon that is passed over the wire and past the stone(s). Once in position, the balloon is inflated to the size of the duct and is slowly drawn out. This in turn forces stones and sludge build up to move down and out of the bile duct into the small intestine.

This is an important intervention, as this can save a person from having to have a major abdominal surgery to remove the gallbladder and inspect the duct directly.

In  certain cases, there may be a narrowing of the duct. Sometimes, this structure is from outside adjacent organs such as the pancreas. When this is observed, tissue samples are taken for later examination by pathologists. Since obstruction of the duct can lead to pain, jaundice, or pancreatitis, the duct is left open with the help of a small plastic device known as a stent.

This stent varies in size, but is less than six inches in most cases. It will remain in the duct with a small portion  sticking out into the bowel for several months, at which point it can be either removed or replaced.

Ercp is not a well known procedure among the public. By sharing this information, a person can help someone who has been asked to undergo this procedure.

Fear of the unknown makes many medical tests worse than they need to be. Recommend to them this article or to speak with a nurse.