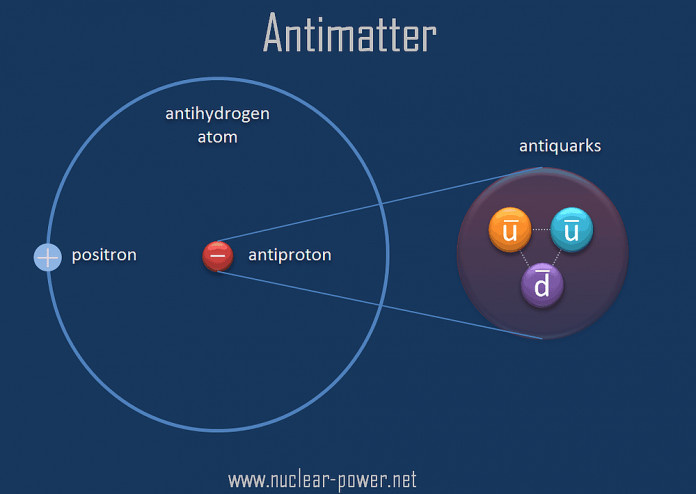 Star Trek fans are familiar with the idea of antimatter. It powers the mythical future starships. It sounds like a wild science fiction concept, but physicists study real antimatter particles. Antimatter exists in cosmic rays, is produced in thunderstorms, and as alluded to in Star Trek, annihilates with matter to produce energy.

In the 1920s P.A.M. Dirac, a British theoretical physicist, developed a formulation of quantum mechanics that included the effects of Einstein’s special relativity theory. Dirac’s equation describing the total energy of the electron included a square root. It is often ignored, but mathematically square roots always have two solutions: a positive and a negative solution.

Based on Dirac’s theory and subsequent experimental discoveries, physicists eventually concluded that each matter particle has a corresponding antimatter particle with the same mass and opposite electric charge.

Carl Anderson shared the 1936 physics Nobel Prize for discovering the positron that Dirac had predicted. This discovery helped convince physicists that Dirac’s theory had physical reality and that positrons were more than a mathematical quirk.

Anderson studied cosmic rays with a Wilson cloud chamber. Cloud chambers produce tracks of elementary particles. Anderson found tracks that had spiraled in the opposite direction as electrons, indicating that they had the same mass but opposite charge as electrons.

In 1955 physicists Emilio Segrè and Owen Chamberlain used a new particle accelerator to discover the first antiprotons and antineutrons. They won the 1959 Nobel Prize for this discovery.

The reverse reaction can also happen. Under the right conditions a sufficiently energetic gamma-ray can produce a particle-antiparticle pair. Pair production usually occurs when the gamma-ray interacts with an atomic nucleus. The nucleus recoils to allow momentum to be conserved in the reaction.

Despite sounding like science fiction, antimatter is a real concept in physics. Perhaps in the distant future, our descendants will use it to power starships.

What is Organic Chemistry? The Chemistry of Organic Carbon Compounds

What is Time? What is the Big Bang?