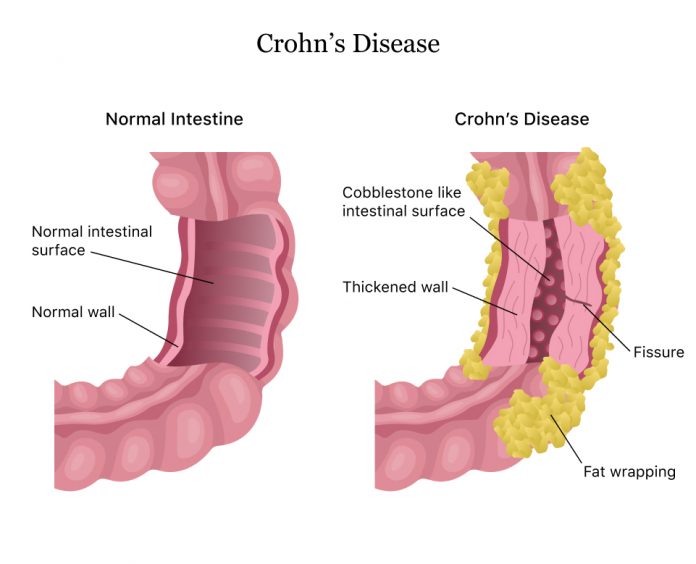 The symptoms of Crohn’s disease are caused by inflammation of the lining of the digestive system, though the causes of the inflammation are not yet fully understood.

Crohn’s disease is a chronic condition that causes inflammation of the lining of the digestive system. In severe cases, ulcers and fistulas can develop in the bowel. The disease can occur anywhere from the mouth to the anus, but is most often seen in the ileum (the last part of the small intestine) or the colon (the large intestine).

It usually begins between the ages of 16 and 30 years, though children and older people can also be affected.

The symptoms of Crohn’s disease vary depending on how severe it is and which part of the gut is affected. Typical problems are:

Symptoms not involving the intestine include:

In most people with Crohn’s disease, these symptoms are not present all of the time. Instead, they tend to occur in episodes called “flares” separated by periods of remission that can last weeks or months.

The precise cause of Crohn’s disease is unclear, though genes may be involved. The condition can run in families, and studies have identified a gene that is often mutated in people with Crohn’s disease.

Crohn’s Disease and the Immune System

Research has suggested that immune responses are involved in the development of Crohn’s disease. The immune system plays a vital role in the gut, removing harmful bacteria that have been ingested in food or drink.

At the same time, the gut contains huge numbers of “friendly bacteria” that help with digestion. These are normally safe from the immune system, as they are recognized as friend rather than foe.

In Crohn’s disease, however, it is thought that a faulty signal causes the immune system to attack all bacteria, harmful or not. This massive immune response releases chemicals that damage the gut lining, leading to the inflammation characteristic of Crohn’s disease. At the present time, it is unclear whether such immune attacks are a trigger of the disease or a reaction to its presence.

The risk may be related to both the number of cigarettes a person smokes and the number of years he or she has been smoking. It is speculated that smoking may damage the vessels that supply blood to the gut or the layer of mucus that protects the gut lining.

Infections and the MMR Vaccine

Crohn’s disease has been linked with bacterial infections such as Mycobacterium avium paratuberculosis (MAP) and with the measles virus and the MMR vaccine.

There is no cure for Crohn’s disease at present, but once the diagnosis is made, medications and diet can help control the symptoms. In many cases, surgery is required to repair damage to the gut caused by fistulas and other complications.