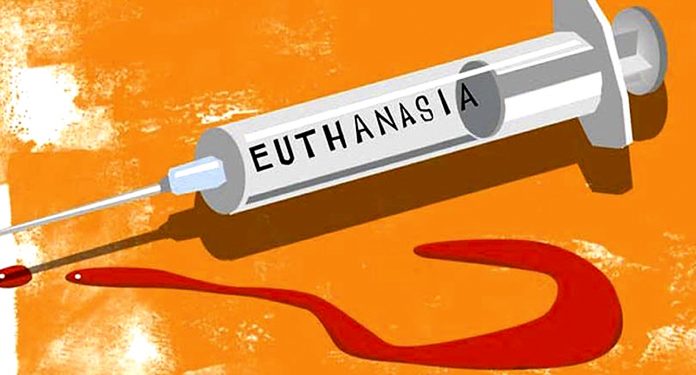 Euthanasia comes from two Greek words and means ‘good death.’ It is intended to relieve a person from suffering. There are several kinds of euthanasia.

For the great majority of people taking a life is wrong, regardless of the circumstances. Euthanasia is, in theory, a beneficial taking of life, reliving somebody of the burden of constant suffering when no alternative to that condition exists.

There are different kinds of euthanasia, as understood by the public, physicians and the law.

Suicide is sometimes regarded as sinful, or an easy way out. There can be no punishment for suicide, but people who have attempted suicide have been prosecuted in some places. It is tragic when people don’t get the help they need, sometimes not even recognizing that they can get help, or even that they need it.

For some people who have as much help as they need, life still is a constantly painful endurance trial.

If a person asks someone to kill them, it is voluntary euthanasia. This is when someone in pain, or with no quality of life, makes a request that their life be ended. An example of this is the case of Vincent Humbert, who begged his mother to help him to die after he was in a road accident that left him with no movement except for his thumb. He used his thumb to spell out his wish to die.

Involuntary euthanasia is the taking of a life without their consent, but in the belief that it is in the best interest of that person. A case in Japan illustrates this. A doctor was treating a good friend and when he knew there was no further treatment, and no way to prevent his friend suffering he killed him without telling him.

The subtle difference between euthanasia being involuntary and nonvoluntary is that in nonvoluntary euthanasia the victim is incapable of making the decision, or trying to refuse. When King George V of England lay, unconscious and dying, in 1936, his doctor gave him an injection of cocaine and morphine, to hasten the end of the king’s life.

In some cases the patient has made a living will, a document that specifies their willingness to have their life shortened in the event of irreversible coma. Relatives, close friends or even attorneys can help with a decision if there is no document of intent and the person is brain dead.

If a person wishes to be relieved of the burden of their life and is capable of taking tablets or injecting themselves, but someone, usually a physician enables this by providing the means, it is assisted suicide.

As with any form of euthanasia, the law varies from place to place, but assisted suicide is illegal and any doctor who provides a fatal dose, even if not administering it, will do so with the knowledge that a prosecution might ensue.

There are two more distinctions to be made. Active euthanasia is the administering of a substance to end life, or the act of killing. Passive euthanasia is when life support, feeding tubes, necessary medication, any means of supporting life, is discontinued and life is left to ebb away with no further interference.

Life is precious. For some, so is a good death.