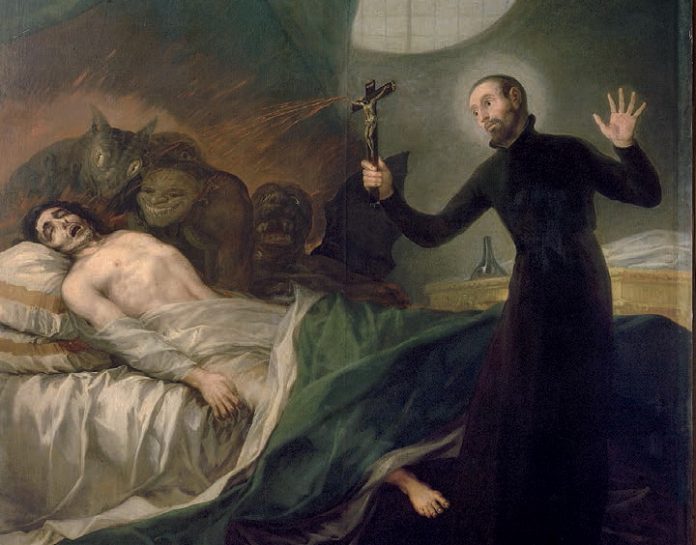 Catholic exorcisms are dramatic and terrifying in popular films such as the Exorcist and the Exorcism of Emily Rose, yet in Catholic tradition exorcism is a common process to cleanse an area or person for God. The practice of exorcism developed from the teaching and life of Jesus of Nazareth, and Catholics continue to embrace various forms of exorcism today.

Though most people think of the exorcism rite with a priest and holy water, the word exorcism has a much broader meaning in the life of the Church. “Exorcism” originates from a Greek word meaning “to swear or call out.” The process of swearing out or calling out demons is connected to Jesus Christ’s ministry in the New Testament.

Jesus set the example for Catholic exorcists in the Bible by casting out various demons. In perhaps his most famous exorcism, Jesus healed a demoniac in whom an entire legion of demons dwelled by casting the demons into a herd of pigs (Matthew 8:27-34).

In the Gospels, Jesus exorcises demons and heals people by his touch, prayers, and presence. Future exorcists would combine these methods to cast out demons in Jesus’ name.

Jesus promised his disciples the power to cast out demons in his name, though he taught that some demons would require certain rituals such as prayer and fasting.

The basis of the modern Catholic exorcism rite began when later Christians, such as the Apostle Paul, began exorcising others in the name of Jesus (Acts 16:16-18).

Types of Exorcism in Catholic Tradition

Catholic teaching breaks exorcism down into two types, major and minor. A major exorcism is the popularly known exorcism ritual, where a priest casts out a demon using prayer and holy water. A minor exorcism is a blessing to protect an individual from Satan and renew her in the name of God.

Since the early Church, catechumens (those aspiring to become Christian) undergo minor exorcism before being baptized. Renouncing Satan affirms the catechumen’s desire to embrace Jesus Christ during her baptism and future Christian life. Indeed, any time an individual renounces Satan, he is performing a prayer of self-exorcism.

Who Can Perform Exorcisms

Cardinal Jorge Arturo Medina Estevez explains in a 1999 interview that because true demonic possessions are potentially dangerous, only specially trained priests with the permission of a diocesan bishop may perform exorcisms (Reisswitz Catholic Culture.org). Any person of faith can recite personal prayers dedicating himself to Christ, however. Indeed, the Vatican recommends prayer to those concerned they may be suffering from curses, temptation, or any other perceived evil in their lives.

Though the term exorcism can inspire fear, the practice itself is as old as the Christian religion. All baptized believers have been exorcised, and exorcism continues to cleanse the world of evil for those of faith.