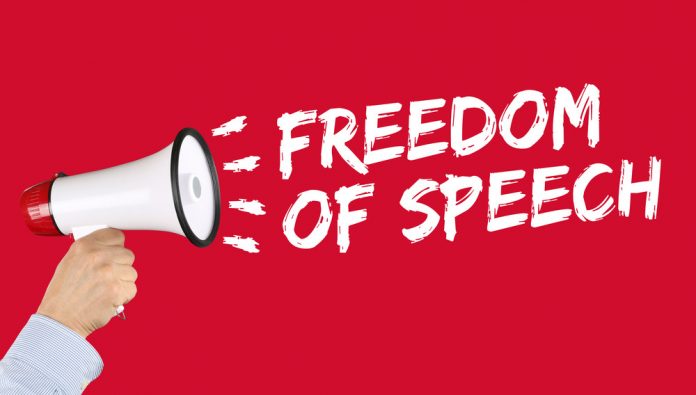 Freedom of speech is a universal right of each and every human being protected by United Nations Universal Declaration of Human Rights. Each nation formally recognizes this law although the degree of its implementation varies.

Freedom of speech is a basic human right and its value could never be underestimated.   Free speech to a certain degree defines the level of creativity and achievement in a society.

Without freedom of speech, the people’s creativity and ability to solve problems effectively are often stifled.  If my freedom to receive and give input is limited then it would be hard to discuss and know fully the options available to me. This, in turn, would limit my views and choices.  Freedom of speech, therefore, is a strong indicator of a society’s progress.

Freedom of expression means the ability to express opinions and ideas without impediments particularly the threat of being punished for doing so.

John Milton and John Locke provided the foundation of the freedom of speech as, we, in modern America know it now.  Their monumental, historical struggles paved the way for the attainment of freedom of speech in the present.

Freedom of speech is specifically provided for in the Constitution of the United States particularly in the 1st ad 14th Amendments. These laws stated that everybody has the right to express ideas free from limitations imposed by the government.  Freedom of speech though, just like any freedom, has its set of restrictions too.  Freedom does come with a responsibility and that is what the restrictions are all about.

These restrictions become legitimate only once the exercise of the freedom poses “clear and present danger”. Also, defamation, obscenity and censorship rules come into play when it comes to the practice of freedom of speech.

Freedom of speech, being a basic civil right, is very essential in preserving peace and order.  Without free speech, it would be hard to understand and resolve differences of opinion.  Understanding comes with communication.  Communication, therefore, is a very important tool particularly in maintaining international diplomacy where differences of beliefs, cultures and religion come into play.

This particularly true in the United States where maintaining our superpower status means delineating policies to neighboring countries through the practice of freedom of speech.

Freedom of speech is important to the American society for several important reasons.
Firstly, it promotes free flow of ideas which help preserve democracy and the democratic institutions.  Secondly, it promotes ideas that are important in uncovering the truth and other noble pursuits. And lastly, it promotes self-actualization of both imparters and receivers of the ideas.

When one talks of freedom of speech, we are often reminded of important people in history who used the right to speak to advance their ideas which were thought to be radical during their time.  Who could forget Patrick Henry’s immortal speech “Give Me Liberty or Give me Death”?

Another important example would be Martin Luther King whose famous speech “I Have a Dream” on promotion of civil rights still evokes powerful emotions even to this day.

Freedom of expression, enables us to express our ideas, uncover truth, evoke powerful emotions, effect radical change and changes the course of history. In the history of mankind, every great and important undertaking in the world involved the exercise of free speech.  Therefore, the preservation of free speech could possibly mean the survival of humanity.