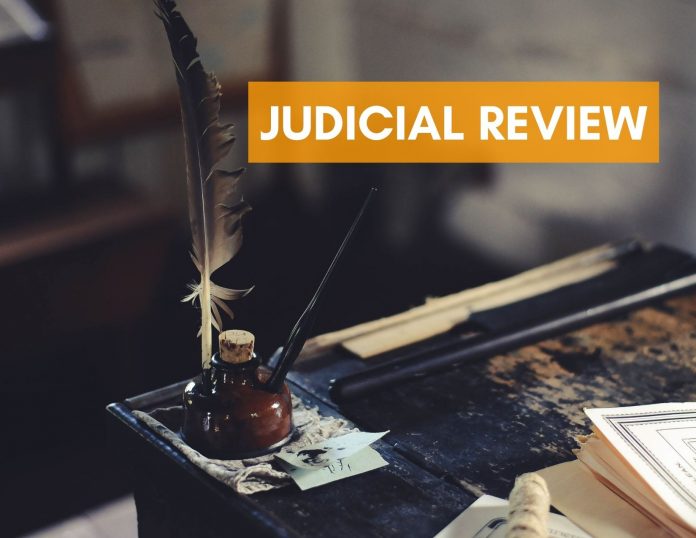 Judicial review is the process by which federal courts can find a law or act of the legislative and executive branches unconstitutional. This also applies to state and local laws. Judicial Review is not found in the Constitution. The legal principle, however, was used in English law as well as post-Revolutionary War courts until becoming an accepted, permanent part of court policy following the 1803 case Marbury v Madison.

How Many Acts of Congress have been Declared Unconstitutional?

Several conclusions can be drawn from these figures. In the early days of the Republic, only one act of Congress was declared unconstitutional by the Supreme Court up to the year 1857. That was the September 24, 1789 Judiciary Act.

Many of the early presidents, like Thomas Jefferson, believed that it was part of Congressional responsibility to determine the constitutionality of laws that were passed. This also accounts for the comparatively low numbers of presidential vetoes in the early years of the 19th Century.

When is Judicial Review Applied by the Supreme Court?

Not ever act of Congress goes before the Supreme Court for review. In many cases, federal acts or laws may be in force for many years before coming before the court as a result of what is called a “live controversy.” This means that a person bringing an action to the court must show that the act has infringed upon their civil liberties or legal rights.

An example would be the 1954 case Bolling v Sharpe, in which the Warren Court overturned a series of acts relating to racial segregation in the District of Columbia schools that dated to 1862, 1864, 1866, and 1874. Scott v Sandford (1857) declared unconstitutional the March 6, 1820 Missouri Compromise which had addressed the question of the expansion of slavery for 27 years.

Judicial Review and the Executive Branch

The Supreme Court can also invalidate laws that arise out of presidential executive orders. The 1944 case Korematsu v United States addressed the issue of Japanese-American incarceration. That action resulted from Executive Order No. 9066, signed by President Franklin D. Roosevelt February 14, 1942. In this case, the court upheld FDR’s executive order.

In 1952, the Supreme Court ruled against President Harry S Truman in the case Youngstown Sheet & Tube v Sawyer. In this case, an executive order authorized the federal takeover of the steel industry as an act of wartime necessity; the United States was involved in the Korean War.

State Laws Subjected to the Process of Judicial Review

States and local municipalities are also subject to judicial review. Throughout its history, the Supreme Court has invalidated more state laws and state actions that federal laws.

At issue in this case is the First Amendment establishment clause. The case was appealed in February 2010 to the U.S. Court of Appeals for the Fourth Circuit after the lower court ruled against the county.

Judicial Review is Vital in Maintaining Constitutional Checks and Balances

The system of checks and balances or separation of powers ensures that no one branch of government becomes so powerful as to circumvent the civil liberties of every citizen through laws or actions that limit certain basic freedoms.

Toward that end, judicial review allows for the scrutiny of laws and interprets the meaning and intent of the Constitution as to the impacts of laws within the nation.

Judicial review also affirms public policy and the immediate concerns facing the survival of Democratic government such as in times of war or when national security is threatened by outside forces operating in a newly interconnected global community. While this mandates a delicate balance between personal liberties and the health of democratic institutions under stress, judicial review applies the most appropriate constitutional scrutiny in light of immediate circumstances.