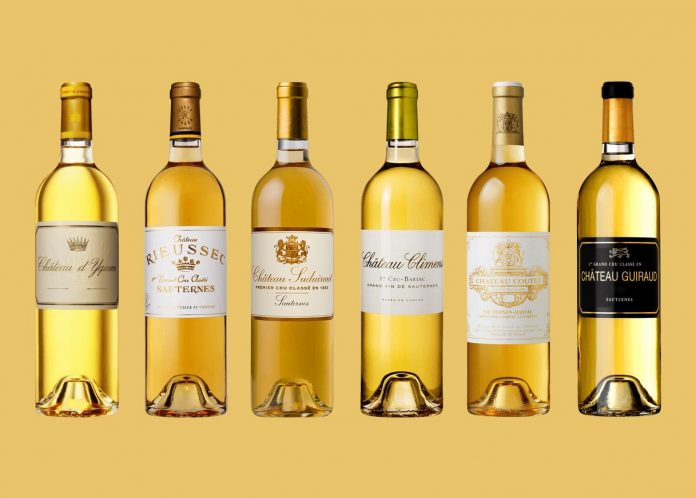 Sauternes is a wine appellation within the famous Bordeaux region of France. The wines produced there are sweet, unfortified white wines made from grapes infected with Botrytis Cinerea, also known as Noble Rot. Noble Rot is a fungus that attacks the grapes causing them to shrivel, inducing a chemical reaction within the grapes that ultimately produces a very complex and sublime wine. The appellation stipulates that the wine must be from one of the 5 specified communes within the Sauternes region, have a minimum alcoholic strength of 13%, pass a tasting test, and the wine must be sweet.

Sauternes is bordered on two sides by rivers: the large Garonne River, and its much smaller tributary, the Ciron Rvier. The two rivers provide a moist microclimate which makes the development of Botrytis possible. Early-morning mists created when the cooler Ciron River mixes with the warmer Garonne have usually burned off by the afternoon when the sun then helps to dry the grapes. This ensures that the fungus’ development is slow and steady. If it develops too quickly, the grape skins may split and may induce Grey Rot.

The filaments of the fungus penetrate the grape’s skin, but leave it impenetrable to other harmful microorganisms. The grapes eventually shrivel to a raisin and are covered with what looks like a grey powder. More than half the water in a grape evaporates concentrating the sugars and acids in the grape. The fungus metabolizes the sugar and acids, and instigates the production of chemical compounds including glycerol, acetic acid, and various enzymes, giving a grape juice that is much different from all others.

Only three grape varieties are grown in Sauternes: Sémillon, Sauvignon Blanc, and Muscadelle. Sémillon is the most important grape, taking up 80% of the vineyard area, its thin skins making it quite succeptable to Noble Rot. Sauvignon Blanc is valued for its high acid content which can add freshness to the blend. Muscadelle is used primarily for aromatics.

Sauternes wine is very expensive to make which is why you will rarely find them at bargain prices. There have been years when some Chateaux have made no sweet wine at all, either due to a very dry growing season in which Botrytis did not develop, or because bad weather destroyed the grapes before they were harvested. In these years the grapes harvested go into making dry wine which can only be sold at a much cheaper price under the general Bordeaux AC appellation.

The maximum yield of grapes harvested per hectare is restricted to a very low 25 hectalitres a hectare, which is more than half the yields permitted in other fine wine regions (65hl/ha is the maximum yield in Champagne, and in the red wine appellations of Bordeaux it’s 45hl/ha). The famous Sauternes producer, Chateau d’Yquem has an average yield of just 9 hl/ha, while most other quality producers range somewhere between 12 and 20 hl/ha.

Very little juice is extracted from each grape as well. About half the water normally contained in the grape will have evaporated making what little juice that comes out during pressing a very thick syrup.

There is also the huge cost of labour involved in making Sauternes. The grapes are picked by hand over the course of several passes through the vineyard. These passes are known as “tries”. The pickers will go through the vineyard picking only those grapes that have been attacked by Noble Rot. The unaffected grapes remain on the vines until the next pass when they may be picked if thought to be sufficiently rotted. Sometimes individual grapes are picked and not the whole bunch.

Sauternes is a luxuriously sweet white wine with intense aromas and flavours of honey, tropical and exotic fruit, and sometimes a whiff of acetone (nail polish remover). While it is a sweet wine, a good streak of acidity cuts through the sugar and preventing the wine from being cloying.

Sauternes is also surprisingly versatile when it comes to pairing with food. In most cases, it is served either before the meal as an apéritif, or after the meal with dessert. It can even serve as the dessert itself.

When deciding on food to serve with Sauternes, be sure that the food has strong enough flavours and a texture that will stand up to the sweetness in the wine. Foie gras and blue cheese are classic pairings with Sauternes. The high acidity in the wine cuts through the rich fat of the foie gras, and the pungent, salty flavour of the blue cheese is tamed by the sweetness of the wine.

You don’t need to stick with the classic pairings, however, and Sauternes doesn’t need to be restricted to before the meal or after the meal. Certain main courses work very well with the sweetness of the wine. Sauternes is a great match with dishes containing creamy sauces, and they also work well with very salty foods. Try it with spicy foods, such as Indian food, as the sweetness helps to put out some of the heat of the food. Experiment with beef dishes, meaty fish, and even crunchy fried foods, like fried chicken.