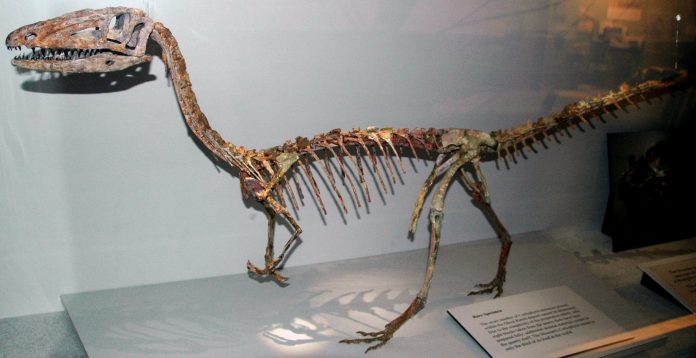 In 1881 a fossil collector named David Baldwin recovered several small dinosaur bones in Rio Arriba County New Mexico. Baldwin packed up the bones and sent them to his boss in Philadelphia, scientist Edward Drinker Cope, who was in the midst of his bitter scientific feud with Othniel C. Marsh, known as the “Bone Wars”.

Cope eventually studied the fragmentary remains and scientifically described them in 1887, attributing them to two new species in the genus Coelurus, C. longicollis and C. bauri. In ensuing years, Cope further described the fossils and in 1889 attributed them to a new genus, Coelophysis, meaning “hollow form” because of the hollow nature of the bones.

Decades passed during which little more was learned about Coelophysis. However, this changed in 1947 due to the efforts of a team of fossil collectors from the American Museum of Natural History (AMNH) and led by Department of Vertebrate Paleontology curator Edwin Colbert.

Colbert’s crew was initially headed to Arizona to collect fossils from Triassic-aged deposits around the Petrified Forest. On the way, they decided to stop in New Mexico at Ghost Ranch, a retreat and education center located near the site where Baldwin had collected fossils more than six decades before.

The crew planned on surveying the strata for a few weeks before heading to Arizona, but these plans changed when on June 22 expedition member George Whitaker discovered several small fossil bones weathering out of the rocks. Other crew members joined Whitaker in scouring the strata and they soon found the rock layer from which the bones had weathered.

The excited diggers spent several days excavating the hillside and found several complete Coelophysis skeletons. With this remarkable discovery, the crew ditched plans for Arizona and stayed at Ghost Ranch for the rest of the summer.

AMNH personnel returned to Ghost Ranch for further collecting in 1948 and, over the two years, removed dozens of skeletons concentrated in 13 separate blocks protected by hardened wraps known as plaster jackets. No more serious collecting was done at Ghost Ranch until the 1980s, when new efforts using modern equipment reopened the quarry and collected more blocks of fossils.

The blocks were sent to various institutions – AMNH, Cleveland Museum of Natural History, Museum of Northern Arizona, among others – for preparation and display, and today Coelophysis is a well-known dinosaur among both scientists and the lay public.

Thanks largely to the numerous Coelophysis specimens collected from Ghost Ranch, we know a lot about this smallish dinosaur. It was an early type of theropod dinosaur (these were the meat-eaters) living during the late Triassic Period about 210 million years ago.

It was bipedal − running upright on its hind legs – and adults measured up to about 10 feet long. The combination of streamlined and lightly built bodies with hollow bones meant that Coelophysis likely ran fast, ideal since it was a predator, using its 100 blade-like teeth to eat small animals.

As the new era of Ghost Ranch excavations began in the 1980s, Coelophysis made headlines in the political arena. In New Mexico, many community leaders and other interested parties were working on a plan to create a natural history museum for the state. To help build interest in this venture, the museum supporters urged New Mexico state legislatures to designate an official state fossil.

In early 1981 Representatives Fred Mondragon and William O’Donnell introduced House Bill 464, which amended a previous law designating several New Mexico symbols to include Coelophysis as the official state fossil. The legislature approved the bill and on April 3, 1981 New Mexico Governor Bruce King signed it into law.