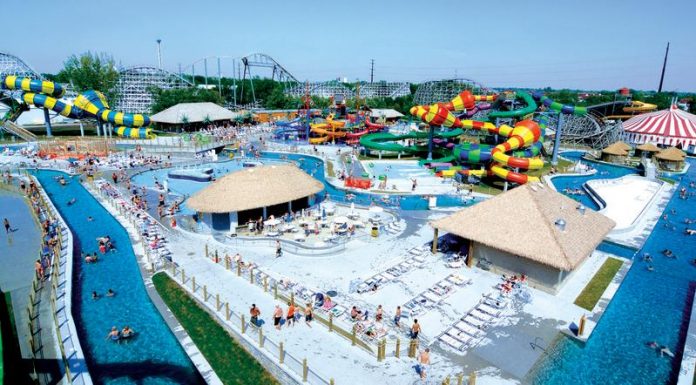 Nestled on the outskirts of a suburb of Des Moines, Iowa, lives a theme park known as Adventureland. The park itself has been around since 1974 and each year the park has attempted to add something new or renovate something old, but with prices hovering around $30 for adults (or less with a coupon found at area retailers) is visiting Adventureland worth the cost of admission?

Adventureland Park: Throwback To The Past

Perhaps in homage to the success of the Disney parks, the first thing built in the park was a main street of buildings, each with an early 1900’s flair housing shops, ice cream parlors, restaurants, and a theater. This part of the park remained mostly unchanged until 2010 when a fire destroyed an entire block of the original buildings. The park plans to rebuild in time for the next season but luckily these buildings are only a small portion of the full park.

Some of the original rides of the park still exist, the Silly Silo (a true Iowa landmark) and a Tilt-o-Whirl. Also still around is a rather ingenious performance venue, Soda and Sounds, a live variety singing review that rises out of the ground every few hours. In almost every aspect of the park they have tried to keep the old style theme park motif going while adding in dozens of newer attractions as well.

For those who consider themselves roller coaster aficionados the park also holds three other coasters, The Dragon being a very fast metal looping coaster, the Outlaw a high velocity wooden coaster, and the Underground a themed underground roller coaster (with a rather lame pre-ride show) built within the remains of the park’s 1980’s era dolphin and high dive pool.

The park also has many other standards, the Galleon, the Raging River, and a log ride to name a few. There are rides there for almost every taste, from the weenies to the thrill seekers and everyone in between. A modest selection of kiddie rides also dot the park providing small scale versions of some of the park’s more intense rides.

Adventureland Park’s Lock On The Future

For newcomers though the most obvious draw to the park is the new water park, Kokomo Kove and Adventure Bay.

This water attraction is provided free with admission to the main park and is being built in stages. By the summer the final water attractions should be up and running, including what is being billed as one of the largest lazy river rides in the country. Already up and running is the Bermuda Quadrangle, a giant tower with access to four different inner tube slides, a giant splash park with several other body slides, a pool, and a swim up bar.

For most families Adventure Bay is probably the place where the kids will want to spend the most time, and well they should. The area is laid out well and there is plenty to keep the kids busy and having fun for hours.

The only real drawback to the place is that in this reviewers opinion the “non-skid” surface around the Kokomo Kove portion of the park seems worn down and a bit slippery, having seen more than a number of kids and adults slip and fall while jogging across the area. Of course, people are not supposed to run in this area but try telling that to a bunch of hyper kids who are ready to get wet!

Adventureland: Worth The Money But Showing Its Age

Overall the park provides more than enough activities and experiences to fill an entire day, for that reason the park is worth the $30 admission fee. However, the park is a rather sleepy, independently run park without the high gloss that the more well known parks can provide.

While the overall atmosphere is not run down, it certainly does not seem fresh and new the way one feels when they enter Disney or a Six Flags park. Still, for a fun and family friendly day of adventure, Adventureland makes the trip worth it.