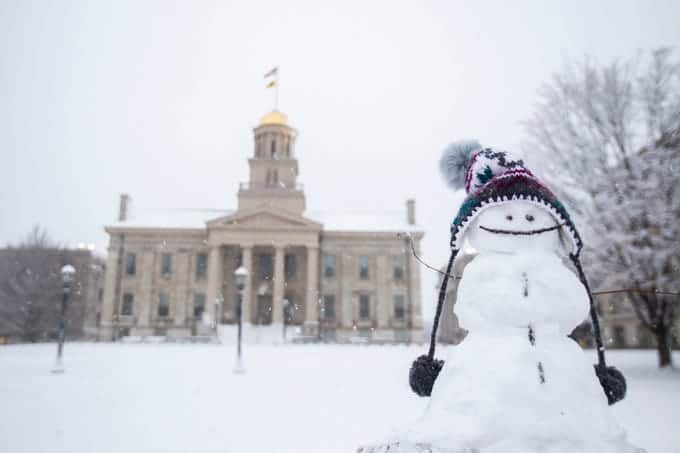 We’re blessed to live in one of the most beautiful places in the world during a snow storm. When that notice comes across the morning television screen that school is canceled, we begin to appreciate our central heat, our pantry of staples, and the view out our picture windows here at the top of the rock bluff that overlooks the Des Moines River and the small Iowa town of Ottumwa, IA.

First word was, the worst of the storm was passing south of us, and we wouldn’t get much more than a couple of inches. Truthfully, it was disappointing. Then Tuesday afternoon forecasters were telling us the storm had taken a turn back our way, and we could get 8 1/2 inches. Without a doubt, we have and it’s still snowing. And it the middle of an Iowa drought, it’s a bountifull, breathtaking blessing.

It’s a beautiful storm, wet and heavy. The snow is clinging to the bushes like huge, soft, fluffy balls of cotton. The evergreen are bowing like penitent priests under the heavy burden of vestal white smocks.

The hillsides are covered with a quilt of lush white velvet. The trees, like long rows of sentries, are decked out in heavy, white frosting. Still the snow swirls, and it’s been a day and a half.

Every snow storm is different, has its own personality, its own peculiar aspects that make it stand alone in the spectator’s mind. A few years ago, I’d never heard the term snow shower. Now I’m well acquainted with it. Yesterday, at irregular intervals of time, this storm was a series of snow showers, wet, slushy, with occasional thunder in the distance. It made it difficult to judge how much snow we were getting as it packed down, heavy, wet and tight.

Then late yesterday afternoon and evening, it turned to heavy wet snowfall, pushed by pelting blasts of wind. That’s when, by the hour, you could step out the front door and watch it piling up. Finally it’s pretty, turning the landscape into a Currier and Ives painting with the snow-covered sunrise.

Here is a video about snowing in Iowa: