IowalumA Q&A blog Shared by Iowa Students & People
Home General Knowledge What is the Difference Between an Em Dash and an En Dash? 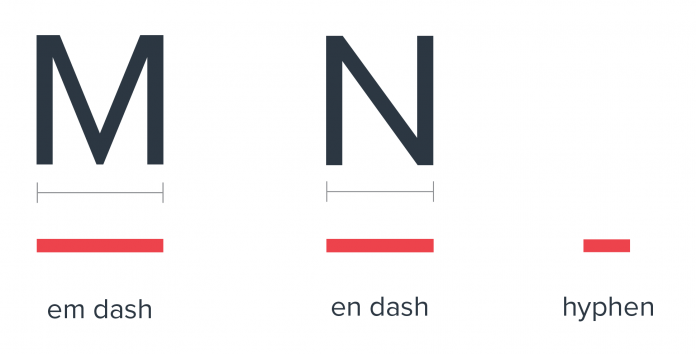 A dash is a punctuation mark that is similar in appearance to a hyphen. Two of the most common versions of a dash are the en dash (–) and them em dash (—). There are many different uses for the en dash, em dash and hyphen but there are still a lot of writers who do not use each mark correctly. Taking the time to learn the differences between the three symbols will help to improve the professional appearance of any writing.

What is an Em Dash?

Also known as an ‘m dash’ or ‘m rule’, the em dash gets its name because it is roughly the width of the letter ‘m’ and is used in a similar way to a colon. It can show an abrupt change or pause in thought, but where a full stop is too strong or a comma is too weak. It can be used to indicate that a sentence is unfinished because the speaker has been interrupted.

What is an En Dash?

The en dash, similar to the em dash, gets its name because it is roughly the size of the letter ‘n’. The en dash is much shorter than the em dash but still longer than the hyphen. Most commonly the en dash is used to contrast values or to illustrate a relationship between two things. It can also be used to show a period of time.

What is a Hyphen?

How to Type an Em Dash or an En Dash

Other than using the above method, Microsoft Word will also recognise that an en dash is required when typing a space then a hyphen and another space and continuing on with a sentence. To create an em dash this way, type two hyphens with no space before the hyphens and continue typing.