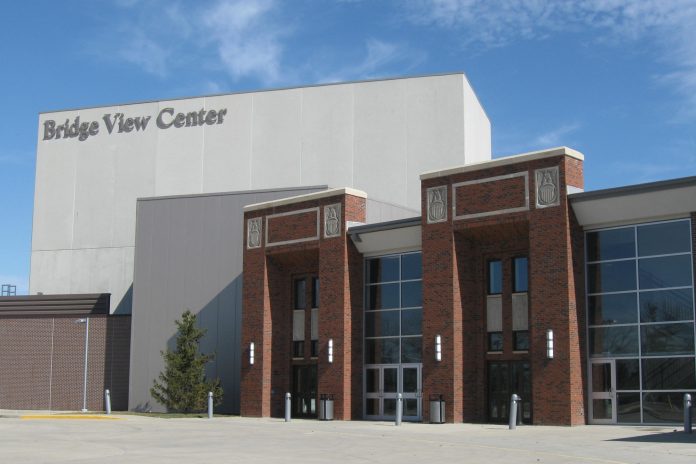 In formally welcoming celebrants to the grand opening, Michael Moreland, a former Bridge View Center Board member, reminded attendees that more than 100 years ago, Ottumwa, Iowa citizens wanted to build a grand Coal Palace; people thought they were crazy. Yet, tens of thousands of people visited the Coal Palace in the 1890s, including President Benjamin Harrison and William McKinley, a future president.

Almost 10 year ago, a group of Ottumwa area citizens came together with one goal – to build a multi-purpose facility to serve as an entertainment hub for Southeast Iowa. Thanks to a $7.5 million grant from Vision Iowa, $4.5 million in local fundraising, and taxpayer contributions from the City of Ottumwa and Wapello County, Bridge View Center opened its doors to 2,500 people on New Year’s Eve 2006 and hundred more for the January 1, 2007 grand opening celebration.

The 50,000 square foot center has a theater, exhibition space, and meeting rooms, and all of them have been in use the first week. Opening Day theater events include magician William the Conjurer, Nik Sorak on acoustic guitar, and several other groups. Meeting rooms had displays from Indian Hills Community College, local employer John Deere, Main Street Ottumwa, and Ottumwa Regional Health Center, among others.

Artist Fred Easker was commissioned to produce an oil painting for the lobby, and the 36-inch by 180-inch painting was dedicated on January 4th. January 6th was a day of family activities and the Duck Soup Magic Show. Open Houses will continue throughout January.

Bridge View Center commemorates the former Ottumwa Armory, on which site Bridge View now stands. When it opened in 1935, the armory was home the the 113th Cavalry — Troop E of the Iowa National Guard. As happened across the country, armories built for the cavalry became obsolete as the U.S.

Army mechanized, and the armory became simply The Coliseum. For many year it was the site of dances, concerts, exhibitions, and flea markets. The Coliseum is commemorated in Bridge View, which uses portions of its walls and a stained glass window entitled simply “Reflection.”

The excitement continues, with children and adults looking forward to Ringling Brothers’ Barnum and Bailey Circut arriving March 1-4 and many event in the interim. Bridge View Center’s goal of creating a season of ongoing cultural and educational programs using local, regional and national organizations will be met through productions of the Ottumwa Symphony and Ottumwa Community Player and regional traveling groups.

Want to know more about future events or find out how to get tickets? Go to http://www.bridgeviewcenter.com. You can also purchase tickets from Ticketmaster at thousands of retail outlets across the nation or online at www.ticketmaster.com.