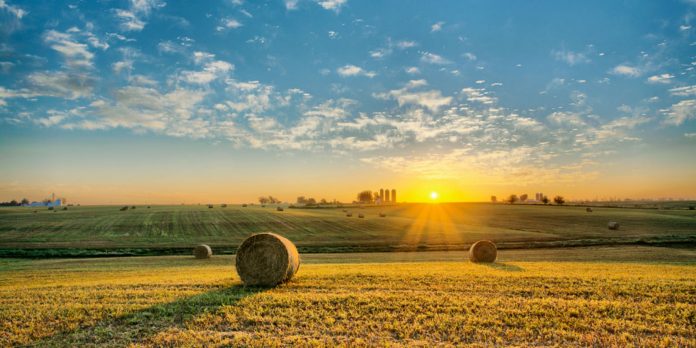 Iowa is a state in the USA, which is located in the Midwestern region. It has the official nickname ‘Hawkeye state.’

This region was known as Iowa territory before attaining statehood. But in 1846, it became the 29th state of the United States of America, and after that, it became known as the state of Iowa.

The state holds the 31st rank in terms of population, which is more than 3 million, according to the 2020 census. Its capital city is Des Moines, which is also the state’s largest city. Des Moines is also home to an outstanding selection of art museums, parks, and tourist locations.

Iowa is well known for its enchanting natural landscapes, and it is also home to many historical attractions. The state has excellent health care services, a rich economy, and a quality of life. It is also the leading producer of corn, pork, and ethanol.

Iowa has a high literacy rate and very low crime rate, and it is considered one of the safest states in the USA.

Here’s a closer look at Iowa’s geography, people, and highlights of the state. 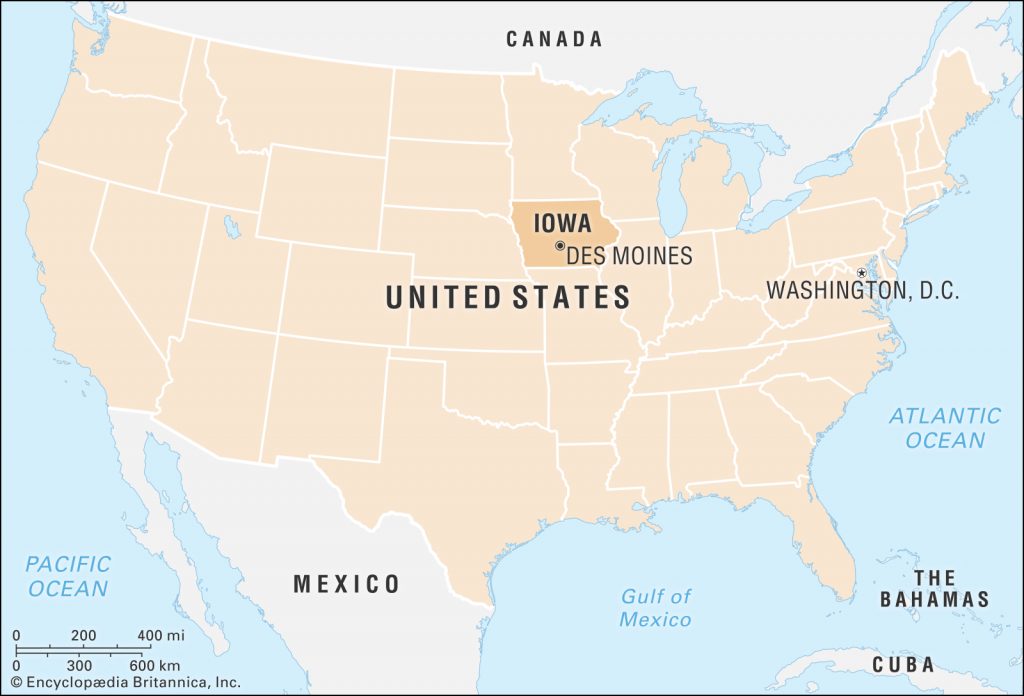 Located in the Midwestern region, Iowa is one of the United States of America. It shares a border with Wisconsin, Minnesota, Illinois, Missouri, Nebraska, and South Dakota. Iowa is bordered by the river Mississippi to the east, Missouri River, and Big Sioux to the west.

The total area of Iowa is 55,857.1 square miles, which makes it the 26th largest state in the USA. The state is divided into 99 counties, out of which 88 counties are classified as rural.

Iowa is not considered the land of high peaks and mountains, although it has 28 named mountains. These can be classified as low mountain ranges as the highest mountain is only 510 meters or 1673 feet. However, it is not considered a flat or plain area either. It has a little bit of both.

The state has many natural lakes and rivers. In fact, it is the only state in the US where the east and the western regions are surrounded by rivers which creates a natural border.

Based on the topography, glaciations, river drainage, and soul, Iowa is divided into eight landforms. These are:

The climate of Iowa

Iowa experiences four seasons; winter, spring, summer, and autumn. Given its position, which is a little far from the equator, the winter is pretty cold. So, the temperature drops to -10°Celcius or 14°Fahrenheit.

The state receives snowfall during late autumn and early spring. But snowfall here is light compared to other northern and eastern states.

Summer in Iowa is pretty warm. So, the average temperature during this season is 30°Celcius or 80°Fahrenheit.

Rainfall is seasonal, which occurs mostly during the summer. On average, the state receives about 26 inches or 660 mm rainfall. Iowa has also experienced severe floods caused by the melting of snow and heavy rainstorms during the summer.

The people of Iowa

The people of Iowa are generally friendly, helpful, hospitable, and kind. This explains why this Midwestern state is considered one of the safest places in the USA.

Iowa’s population at present is not that diversified as 90 percent are white, which is then followed by black or African American at 3 percent. The rest is composed of Asians, Native Americans, Pacific Islanders, and some other races.

To understand why the vast majority of the people of Iowa belong to the white race, let us take a look at its early history.

A brief history on the people of Iowa: Population composition

The Native Americans were amongst the first people who lived in this region, which is present-day Iowa. It is believed that the Indians lived there for thousands of years, even before the arrival of the Europeans.

Among the first European explorers who set foot in this region was the French. They gradually took control of the region, and it became a French Territory until their departure in 1763.

The French partially ruled the territory for many years, which explains why the Flag of Iowa resembles the French flag, composed of blue, white, and red. The exact origin of Des Moines, the capital city of Iowa, is still unclear. However, it is also believed to have come from the French word.

Following the arrival of the European explorers by the 1830s to 40s, the Indians or the Native Americans were forced out of the region.

Although the Germans began arriving in the 1840s, the descendants of Germans make up the largest ethnic groups in Iowa. In fact, the German-American population grew so fast that most of the region almost became a German colony.

However, the German culture and its influence came to a halt when the first World War broke out. Moreover, the anti-German movement was launched throughout the United States. Nevertheless, you’ll often hear the German language in some parts of Iowa.

Apart from the Germans, the Dutch, Irish, and the British are also significant ethnic groups. So are the Czech and the Norwegians,

Until the late 20th century, many young people moved out of the state, resulting in population aging. This led the United States government to open foreign immigration in Iowa by the early 21st century.

Occupation of the people of Iowa

Being America’s top producer of corn and pork, many people may assume that most of Iowa’s population are into agriculture or work in farms, but this is far from reality.

Of course, the state has a significant number of workers in the agricultural sector. Still, much of the state’s workforce is in biotech industries, health care, fuel, renewable resources, construction, arts, entertainment and recreation, finance, and education.

In fact, the top industries in the state are healthcare and social services. In contrast, the highest contributor to Iowa’s economy is advanced manufacturing that generates over 30 billion dollars each year. The industry with the most employees is trade, transportation, and utilities, which has more than 300 thousand workers.

Highlights of the state of Iowa

When it comes to highlights, the Iowa State Fair surely gets the no.1 spot. It is one of the biggest state fairs in the whole of the United States. The fair is held every year in August.

It was way back in October 1854 when this grand event of the state started. The fair moved from town to town during the first few years and was hosted by different towns, including Iowa City, Muscatine, Dubuque, Keokuk, Burlington, and Clinton. Later on, in 1886, it was decided that the state fair was to be held every year in Des Moines.

Speaking of fun, thrills, and excitement, you will find it all here at the Iowa State Fair. The fairground is about a mile square, including the campsite. And it attracts more than a million people from all over the world every year.

Some of the top attractions are the carnival rides, monster trucks, agricultural competition, giant slides, truck pulling, motorsports, and grand concerts by popular bands. You’ll also get to savor some of the best foods and drinks, including alcoholic beverages at the fair.

The United States of America is the largest producer of corn globally, and Iowa is its main contributor. In 2017, the state managed to produce over 2.7 billion bushels.

In Iowa, about 99 percent of the corn produced is field corn. These are mostly used as cornstarch, corn oil, corn syrup, and corn cereal. The type of corn grown here is known as ‘dented corn’ because of its unique dent in its kernel.

The state is also the highest producer of ethanol in the US, and corn is the reason for this. About 39 percent of the corn produced is used for producing ethanol. While some 15 to 20 percent are used to produce livestock feeds.

The Grotto Of The Redemption

This grotto is the biggest in the world and is also considered the Eighth Wonder Of the World. As its name suggests, the grotto of redemption is a religious shrine where the life of Jesus Christ is portrayed through its nine caves.

It has a huge collection of fossils, petrifications, minerals, and fossils. The minerals and rocks used to build this grotto are estimated to be more than 4 million dollars.

This Eight Wonder of the world attracts at least a hundred thousand visitors each year.

This is a festival that lasts for one whole week. It is held in Le Claire every August. There is numerous competition that takes place during this grand event.

The tug fest’s top events include:

The tug of war is the festival’s main event. This tug of war is unique and special because it is the only tug of war across the Mississippi River, which is the longest river in the USA.

It involves tug teams pulling a 2400 foot long, or 731 meters, rope weighing at least 680 pounds stretched across the Mississippi River – banks of Le Claire-Iowa to Port Byron-Illinois, to be precise. This grand event is witnessed by more than thirty-five thousand people each year.

And that is not all. A tug fest is also an event that allows the families and friends to enjoy carnival rides, delicious foods play games and win prizes, great music, and fireworks.

Apart from being the largest producer of corn and ethanol in the Country, Iowa holds the title for the highest pork producing state.

With over 5400 pig farms, the state produced over 47 million hogs in 2018 alone, which amounted to 2.1 billion dollars, and it has nearly one-third of the hog population in the USA.

According to some reports, one out of ten working people in Iowa work in the pig industry.

About 25 percent of the state’s fertilizer needs come from livestock, pig, production.

Other places that need to be on the list of Iowa highlights are: