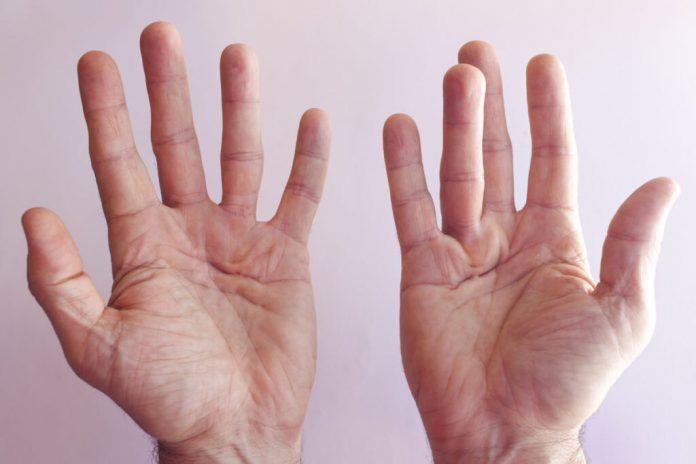 Dupytrens contracture is a disease which affects the fingers on either one or both hands. It causes the affected fingers to bend towards the palm.

Dupuytrens contracture is a benign fibroproliferative disease of the hand. Some of the tissue in the hand undergoes a process similar to scarring, where the cells increase in number and produce extra matrix such as collagen. This tightens and contracts and causes the affected fingers to be pulled towards the palm of the hand. Eventually the fingers can not be straightened leading to loss of use of the affected digits. Dupuytren contracture can affect both hands.

The cause of Dupuytrens contracture remains unknown. It is more common in men than women and usually in the middle to elderly years. It can occur in younger patients but is often a more aggressive form in the young. In some countries, Dupuytren disease is considered an industrial disease, though not in most. Other factors associated with Dupuytren contracture include injury, repetitive injuries, genetics, family history, other diseases and some drugs.

Three stages of the disease have been described: proliferative, involutional and residual. Each patient can progress through the stages at different rates. As the disease progresses the disease changes in appearance, the original nodules eventually disappear leaving just a tight cord.

Treatment involves a comprehensive clinical assessment and evaluation. Evaluation involves any family history, age, whether the Dupuytren’s contracture is bilateral, and any history of other concurrent diseases. Treatment can involve surgery, with a number of surgical techniques available. Though surgery can be associated with a high-recurrence rate, and can be as high as 71% for some surgical techniques in susceptible patients. Post-operative complications can include infection, nerve damage and loss of the fingers. Post-operative care following surgery involves rehabilitation and some surgeons use splinting.

A number of nonsurgical treatments have been reported these include radiotherapy, steroids, the use of the enzyme collagenase, which degrades collagen, and others. These are not without potential complications including tendon rupture after using collagenase.