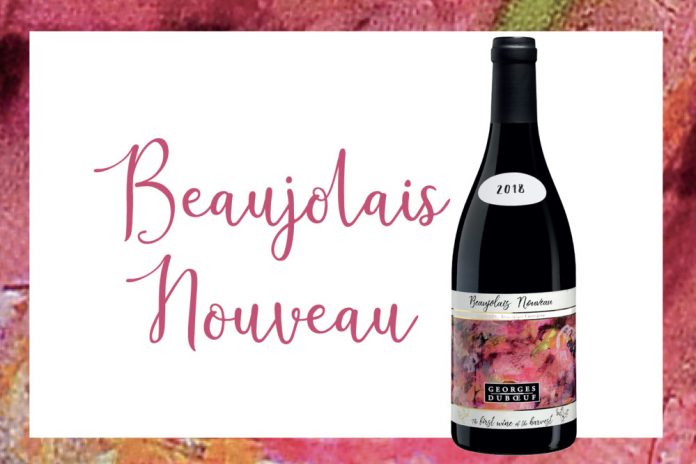 Beaujolais is in fact an entire wine making area within France and technically falls under the Burgundy region for administrative purposes. Whilst the region makes some good standard wines, it is Beaujolais Nouveau for which the region has become most famous.

What is Beaujolais Nouveau?

Beaujolais Nouveau, as the name implies, is a young wine which is to be enjoyed almost immediately. Unlike the great aged French wines, Beaujolais Nouveau is sold and enjoyed best at an age of just seven to nine weeks.

The wine is in essence a celebration of the grape harvest, as such one should look to enjoy Beaujolais Nouveau around the regions harvest time in November.

Since 1985, Beaujolais Nouveau has been subjected to an official release date which is the third Thursday in November. Whilst the wine can be exported before this date, it must be held in a bonded warehouse and not sold until midnight on the day of release.

Beaujolais Cru is reserved for the top ten villages in the North of the appellation however, these grapes never find there way into Beaujolais Nouveau.

The Traditions of Beaujolais Nouveau

Whilst the young wine started life as a simple wine drank by agricultural workers in the region, traditions and legends have sprung up around Beaujolais Nouveau. Firstly, the wine has historically been shipped into the city of Lyon, giving the urban classes an early wine to celebrate with. From here the wine has gained popularity on a world wide basis and is exported on a global scale today.

One famous tradition includes a race from France to the UK and started in 1972, when a Fleet Street journalist Allan Hall challenged his readers to bring back the first bottle of Beaujolais Nouveau after its mid-night release.

The race has continued every since, each year a plethora of entrants attempt the “Beaujolais run” in a variety of vehicles from classic cars to light aircraft. Previous entrants of note have included an RAF Harrier Jump Jet through to the use of an elephant.