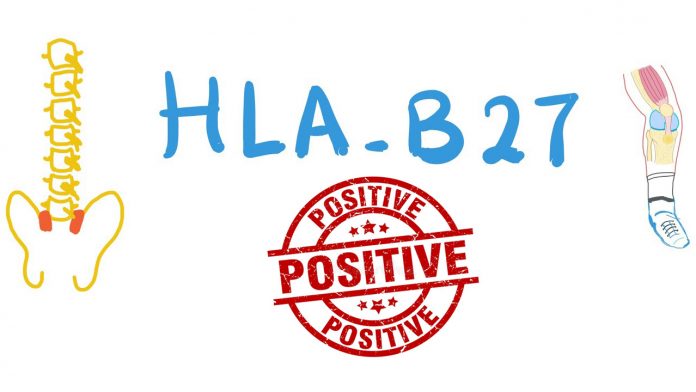 HLA-B27 is a human leukocyte antigen found in human blood that is associated with some autoimmune disorders. The test is sometimes performed as part of an arthritis panel when patients exhibit specific arthritis symptoms. If it is present in the blood, it may indicate an inflammatory spondyloarthropathy such as anklylosing spondylitis.

HLA-B27 is a human leukocyte antigen that was discovered in 1972 to have association with ankylosing spondylitis. Since that time, it has been linked to over 100 inflammatory conditions that affect the eyes, skin, joints, and bowels.

Because HLA-B27 is a genetic marker for certain conditions and can be present in the blood without the presence of disease, tests are usually only performed if there is clinical suspicion of an associated disease. If HLA-B27 is present in a patient’s blood and correlates with patient symptoms, a diagnosis can be made.

The spondyloarthropathies and other HLA-B27-related conditions are inflammatory in nature. This means that symptoms wax and wane in severity based on the amount of inflammation present.

Doctors may test for inflammation with blood tests like the ESR (Erythrocyte Sedimentation Rate) or CRP (C-Reactive Protein). High levels of inflammation (or small amounts over the long term) may cause permanent damage to joints and other tissues. The most common HLA-B27 spondyloarthropathies are:

These conditions may mimic other type of inflammatory arthritis such as rheumatoid arthritis. However, the spondyloarthropathies all have distinct signs and symptoms in addition to the presence of HLA-B27.

A rheumatologist, a physician who specializes in autoimmune diseases, is the best person to diagnose and treat such conditions. Even then, it is not always easy to determine the exact type of inflammatory arthritis.

Ankylosing Spondylitis – (AS) affects the spine, large joints, and digits with morning stiffness and pain. During acute flare-ups, fever, anemia, and other constitutional symptoms may be present and it may also inflame the heart, lungs, or chest wall. Some AS patients experience uveitis, an inflammation of the eye, but it is not usually severe.

Back pain is the most common symptom with progressive kyphosis (hunching of the spine) and loss of flexibility.

Psoriatic Arthritis – Patients with psoriasis and HLA-B27 may develop psoriatic arthritis. This type of arthritis is usually asymmetric which means if one knee is affected, the other may not be. Rheumatoid Arthritis (RA), by contrast, is symmetric (both sides affected simultaneously).

Reactive Arthritis – Just as it sounds reactive arthritis occurs in reaction to something else – an infection. It usually follows a urinary tract or gastrointestinal tract infection.

The arthritis varies in severity and may be combined with eye inflammation, mouth sores, and other skin lesions. Although, reactive arthritis initially resolves within three to four months, up to 50% of patients will have ongoing arthritis symptoms that wax and wane.

Most symptoms will not fully manifest until adulthood. This is why many children with HLA-B27 spondyloarthropathies will first be diagnosed as having Juvenile Rheumatoid Arthritis (JRA).

Two other inflammatory conditions associated with the HLA-B27 marker are Inflammatory Bowel Syndrome (IBS) and Acute Anterior Uveitis. Patients with these syndromes may also suffer from arthritis symptoms.

For all inflammatory arthropathies, controlling inflammation is the key to effective treatment. Long-term inflammation leads to damage of joints and other tissues. Patients may be treated with anti-inflammatory medications or even disease-modifying agents. Rheumatologists generally manage medications for patients with HLA-B27 conditions.