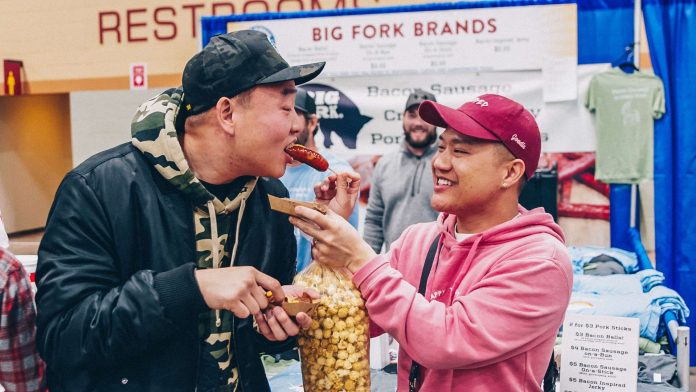 According to the story in Juice, organizers moved the location of the Iowa Bacon Festival to the Scottish Rite Consistory. This allows space for 600 people – double the previous amount. Tickets went on sale at 12 p.m. Thursday, February 4, and by 12:25 p.m. they were all sold!

Tickets were priced at $35 each for the day long event. More than 1,000 pounds of bacon will be consumed.

Organizers want to keep the Festival small and intimate, and feel that having it in the hall will still work OK. The event has grown from 200 people celebrating at local bars to what organizers thought would retain the “small” feel but hold a crowd of 600 No matter if you love bacon or not, this event sounds like lots of fun!

The Blue Ribbon Bacon Festival also expanded outside of Des Moines. Smaller festivals were organized in Scottsdale, AZ, Nampa, ID, and Pittsburgh, PA. Iowa bacon producers are happy to have their bacon showcased and are working hard to decide whether to take the bacon to the people or to bring the people to the bacon.

They are thinking of possibly moving the Festival from February to a warmer time of year. An outside location would probably work well for this type of event.

More than 1,000 pounds of bacon will be available.

At mid-day the Bacon Showcase opens featuring bacon from many local farms. A lecture on “Why Everything Is So Much Better With Bacon” by Jonathan A. Campbell from the Iowa State Meat Laboratory will be given at 11:45 and repeated at 1:45 p.m.

A second course of bacon sliders with Baconaise will also be served.

The Festival ends with the “bacon” cheer and moves to a lounge where lots more bacon and drink specials will be served.

Bacon Week entertainment in Des Moines will be the whole last week of February. Sorry if you weren’t able to get tickets for the Festival, but several bars and cafes will be offering bacon specials and specialties each day.

If, for any reason, you are unable to partake, just go to the grocery store and ask for a pound of great Iowa bacon.
You and your family will possibly want to have your own bacon festival.

Your choice may be to just crisp a couple of pieces in the micro-wave or it may go to the gourmet with bacon wrapped in chocolate.

No, too much bacon shouldn’t really be in your diet, but a couple of pieces now and then or a few crumbles on a salad can be very tasty. Make plans for the Bacon Festival in Des Moines.