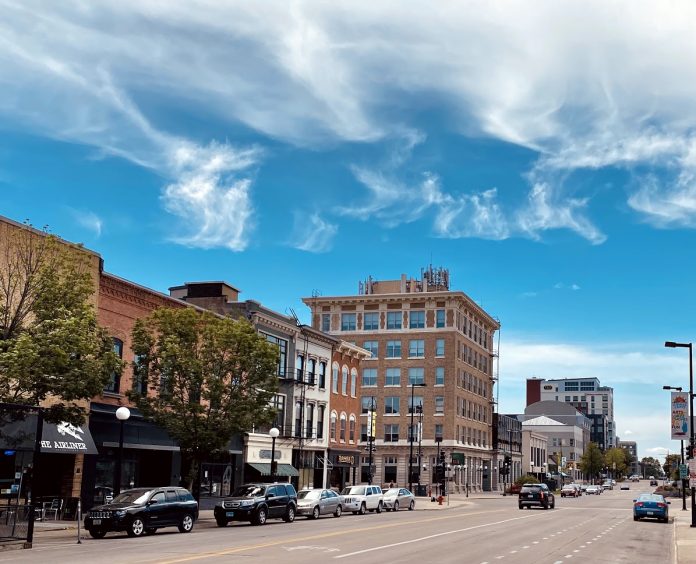 Iowa City, Iowa is known to many people in the USA as the home of the Hawkeyes, a Big 10 College that competes ferociously in sports known for their tenacity and skills.

The University of Iowa is also heralded for it’s acedemia as well as it’s huge complex known as the University of Iowa Hospitals and Clinics, UIHC. The UIHC is one of the largest teaching colleges in the country. Teaching medical students how to become Doctors, Nurses, you name it. Iowa City is the fountian of youth. As a majority of it’s population is students coming and going every semester- this keeps the town vibrant and youthful.

Almost every major building in town, besides a handful, are owned by the University of Iowa. Every year a new building is erected and/or an old one is remodeled. Things are a hustle and a bustle around campus. And the college is a swelling thriving entity in itself.

Hand laid bricks line the streets for four sacred blocks in an L shape on Dubuque Street and College Street making the area varied yet simple. There are food carts selling George’s Best Gyro’s or Grilled Cheese Sandwiches- both delicious and inexpensive. There’s the gourmet grocery store. Or the Sheridan Inn with their wine bar.

You’ll see many patrons coming and going from the wonderful restaurants there- Giavanni’s, Vito’s, Formosa or the Jewelry stores Herteen & Stocker and Iowa Artisans Gallery. There is a still life of a tornado in metal perhaps commerating the tornado’s that passed through Iowa City damaging many homes a few years ago.

There’s two astounding glass and chiseled rock modern art pieces that stand very tall. In the spring and summer there’s flowers and plants everywhere. There’s secret little stairways that take you to apartments above the businesses.

And sometimes those stairways take you to businesses above the businesses like the Hall Mall which is accessible by only one stairway from the Pedestrian Mall where you can get a tattoo, buy hemp clothing, or partake in something alternative -always the M.O. there.

The City Council voted no to smoking tobacco on the Pedestrian mall, only in designated areas. And those are hard to find! Most smokers take refuge in the Tobacco Bowl where you can get a latte, or a hot apple cider with caramel steamed- all frothy in it’s fantastical glory. Skateboarding is also banned. So if you are a skateboarder looking for a board friendly town, Iowa City’s downtown isn’t for you.

Then there’s the nightlife. At night it becomes a party zone. Especially on the weekends when the University of Iowa is in session and the students are in town. The U of I girls dress to the 9’s and the U of I men pack their wallets with cash or plastic. They go out on the town and party like there’s no tomorrow. They go to the huge club called the Union which has at least three separate bars in it and three separate dance floors.

Then there’s Vito’s. For those of you who are older there’s the Mill around the block, or the Piano Bar. And if you’re really in for a great show go to Studio 13 Iowa City’s “All Lifestyles Club” and support the local drag queens who work so hard to preform for you! Their following is immense and the crowds go crazy for them. The music they play is electric. It’s wonderful.

If the weather is pleasant, and it is 3/4ths of the year, sitting on one of the “Ped. Mall’s” strategically placed benches will give you much to witness as people walk by in a peaceful pretty environment. The trees are so warm and encompassing.

Everything on Iowa City’s Pedestrian Mall is perfect. It’s quite like a drug actually, you’ll find you need it when you’ve been away. And you are drawn back to it. It’s magnetic.