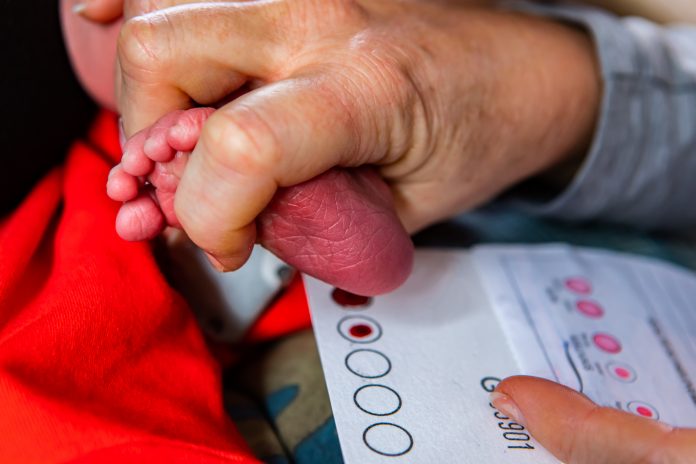 Newborn screening in Iowa has proven to be important to the lives of the families connected to newborns who have tested positive for any of the disorders screened. If these disorders are detected early, the infant can receive the care and treatment needed to assure them the healthiest and most normal life they can possibly have.

This early treatment is not only beneficial to the health of the infant, it is also beneficial to the family and even on to the state where the infant resides because the financial burden will be lessened if treatment is started early. With these two factors in mind, the State of Iowa requires that all newborns be screened before leaving the hospital.

Biotinidase is a disorder caused by a deficiency of biotin. This deficiency can cause skin rashes, developmental delays, hearing and hair loss, optic nerve atrophy, seizures, coma and, unfortunately, death. Treatment of this disorder is a doctor prescribed dosage of 10mg of biotin, which can correct any symptoms, including hearing loss and vision loss, as long as the treatment continues for the remainder of the infant’s life.

Congenital Adrenal Hyperplasia is a disorder caused by the deficiency of cortisol and/or aldosterone due to the adrenal gland not working properly, causing dehydration, vomiting, vascular shock, adrenal crisis, female genitalia virilization and early puberty. Treatment of this disorder is a doctor prescribed replacement therapy of cortisol and aldosterone and in more extreme cases, surgery may be required to correct genitalia problems.

Congenital Hypothyroidism is a disorder caused the thyroid hormone not working properly. This disorder can affect the infants body organs, causing them to function improperly. Brain development can also be affected by this disorder. Treatment is generally a doctor prescribed hormone replacement therapy.

Galactosemia is a disorder in which an enzyme is missing or is not working properly to convert galactose into glucose, causing a build up of galactose in the infant’s body. This disorder can cause cellular damage to the infant’s eyes, liver and brain, jaundice, hypoglysemia, vomiting, diarrhea, seizures and can even result in death. Treatment for this disorder is a strict diet, free from diary products for life.

Hemoglobinopathies are blood disorders caused by the presence of hemoglobin S, which is responsible for the red blood cells becoming damaged from them constantly changing shapes. These disorders can cause acute chest syndrome, cerebral vascular accidents, renal and splenic dysfunction and death.

Infants who are diagnosed with one of these disorders must remain under close supervision of a doctor, who will diagnose the proper regimen according to the hemoglobinopathy that the infant has tested positive for.

Amino Acid Disorders are disorders in which the infant’s body cannot metabolise protein. These disorders can cause brain damage, seizures, mental retardation, coma and death. Treatment of these disorders will vary according to the amino acid disorder and can vary from person to person, but generally these disorders are treated with a special diet and usually a medication prescribed by a doctor.

Fatty Acid Oxidation Disorders are disorders that happen when an enzyme deficiency prevents fat from being broke down into energy in the infants body. The health problems caused by these disorders vary from disorder and from person to person, but some infants may have hypoglycemia, an ear infection, the flu, fat in the liver, kidneys and lungs, swelling of the brain and even death. Treatment of these disorders are avoiding fasting, managing fat intake through dieting and supplementing L-Carnitine to remove the toxic products from the body.