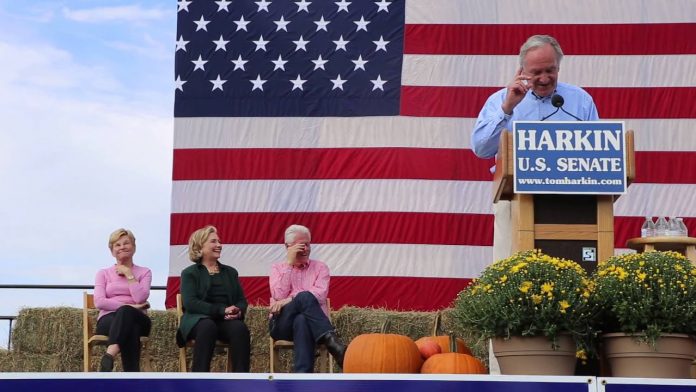 Democratic United States Senator Tom Harkin is holding his 30th annual steak fry at the balloon field on September 16 in Indianola, Iowa, which is located in the home county of the junior senator from Iowa.

The gates open at noon. Senator Harkin typically holds the event at the Warren County Fairgrounds, but due to the extremely large that is expected at the event he had to find a bigger place.

Former Senator Mike Gravel of Alaska and Congressman Dennis Kucinich did not receive an invitation to my knowledge. I assume the organizers did not find their candidacies to be viable at this point. My apologies to their supporters out there, maybe you should write Senator Harkin a letter.

Senator Tom Harkin has been representing Iowa since 1976 in the United States Congress. First as a Congressman in the fourth district Iowa then he was elected to the United States Senate in 1984. Harkin’s steak fry has always been the place to go if you are a Democrat trying to woo Iowa voters.

Famous political names such as Former President Bill Clinton, CNN analyst and well-known political consultant James Carville and the liberal stalwart former U.S. Senator Paul Wellstone of Minnesota have all attended the steak fry in the past. Harkin landed a big coo back in 2002 when Jim Jeffords of Vermont came to speak at the event.

Jeffords will go down in political history for having swayed the United Senate’s control to the Democrats by leaving the Republican Party and becoming an Independent who caucused with the Democrats for committee purposes.

I have been to the steak fry the previous two years and it was very fun. The entire place is very handicapped accessible due to the fact that Senator Harkin is a champion legislator for those people with disabilities. His own brother was deaf and his nephew Kelly was paralyzed in an accident during his service in the United States Navy.

They typically serve steak, chicken and fish so there is a wide variety of meats available there in my mind. The headliners for the two previous years have been John Edwards in 2005 and Senator Barack Obama in 2006.

The crowd for the event featuring Obama was much larger. People were bused in from all around the state of Illinois and the country for that matter. There was even a contingency from Kenya who were hanging out with Barack as he had just been to Africa to promote AIDS awareness at the time. Both Edwards and Obama stuck to the same message that they use now.

Edwards’ message being about how the poor were getting shafted in this country and the system being rigged. Hurricane Katrina was still fresh in people’s minds and the headlines so he used how the Bush Administration were not going to pay decent wages in his view to local contractors to rebuild New Orleans.

Senator Obama’s speech of course was a lot less partisan in nature. He spoke of hope, progress and coming together. Obama told the story about the one hundred and four old woman Margaret Lewis and how much she had persevered through in her life. It really is a compelling story, no matter what your political persuasion is.

I suspect there will be a lot more retail politicking going on this year with the Presidential candidates trying to build an organization in all ninety nine counties of the state. Although there is some pressing the flesh going on all the time, in fact I have a couple of stories that relate to that. Former Congressional candidate Bill Gluba who is a realtor was really working hard for my vote in 2005 until I told him I didn’t live in his congressional district.

He still gave me a sticker. I didn’t want to tell him that I wouldn’t support him in a Democratic primary even if I had the option because of his pro-life position on abortion. Then there was another former Congressional candidate in Joyce Schulte who was forcing you to take her stickers.

I had no more room on my shirt at that point and once didn’t live in that district. She was very rude about it, asking whether we’d prefer her opponent to get re-elected. Being a trained psychiatrist she should have brought more charm to the table. Joe Biden was the first candidate to offer by e-mail to buy some of the tickets of supporters. I assume my mailbox will be flooded with reminders about the event by the end of the week.

Ticket prices range from $10.00 for students to $500 dollars if you want to meet and have lunch with Senator Harkin as a “host ticket.” I bought my tickets myself because I haven’t decided on which candidate I plan to support yet and they cost $45.00. All the proceeds go to Tom Harkin’s re-election campaign and are not tax deductible.

For more information to see if they might have a few tickets available just go to tomharkin.com. They have directions there to the festivities. All candidates will have signs there for their supporters to hold up and you get to meet and talk about Iowa strategy if you have selected a particular candidate at that time.