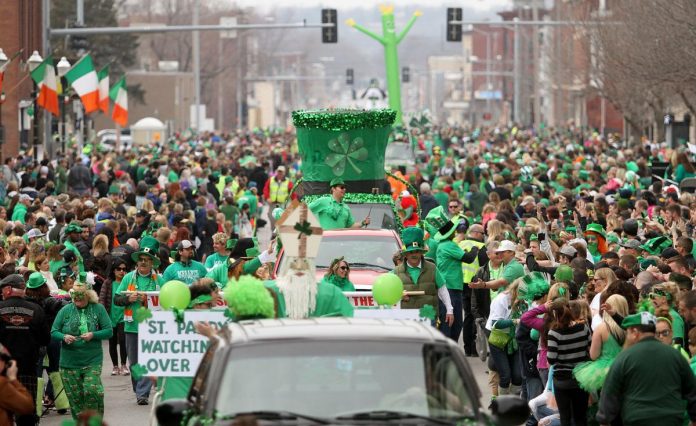 St. Patrick’s Day is celebrated with parades, marching bands, corned beef and cabbage, green beer and leprechauns. The holiday that we associate with dancing, music and drinking has religious and political origins. St. Patrick was a Saint credit with bringing Christianiy to Ireland.

Today, everyone can be Irish on St. Patrick’s Day. Wear a green carnation, or a shamrock and gather with friends and neighbors for a public party.

St. Pat’s parades will take place around Iowa. The Quad Cities is noted as an interstate parade that starts in Rock Island, Illinois and finishes in Davenport Iowa. Following are some of this year’s St. Patrick’s Day Parades around Iowa.

St. Patrick Society, Quad Cities, USA
Rock Island, Illinois to Davenport, Iowa, March 15
The Quad Cities area includes the cities of Davenport and Bettendorf in Iowa and Moline and Rock Island in Illinois The St Patrick Society sponsor’s a unique parade crosses the Mississippi River and over the State Line between Illinois and Iowa.

The Quad Cities Grand Parade is the only interstate St. Patrick’s Day Parade in the U.S.A. The Parade starts in Rock Island, Illinois and travels over the Mississippi to Davenport Iowa.

Irish Heritage Day, Isle of Capri, Bettendorf, Iowa, March 16
Noon to 5 pm
The Mullane Irish Dance Academy will perform to traditional Irish tunes, kicking up their heels to the music. The Gilhooly Award will be presented. This is a family oriented event honoring Irish history.

After the parade a reception is held at Embassy Suites, which lasts until about 4:30 pm.

The Iowa Department of Public Safety has issued a safety reminder. The department wants to remind motorists and passengers of the dangers of driving and driving. Since many St. Patrick’s Day celebrations include alcohol, motorists should take care not to drink and drive.

In addition, passengers should not get into car with a driver who is impaired. “Don’t test your luck this St. Patrick’s Day.” Designate a sober driver before the festivities begin.