IowalumA Q&A blog Shared by Iowa Students & People
Home Politics & Religion Thailand’s Government and the PAD: Who is the PAD and What do... 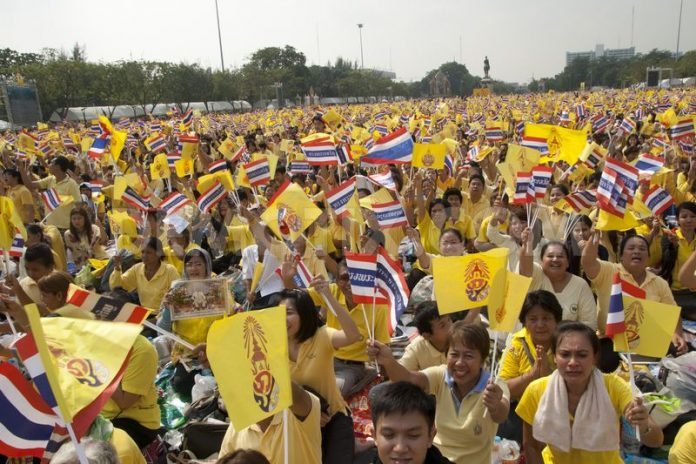 What is happening in Thailand has been forseen by political analysts for some time, but no one imagined it would polarise the country to the extent that it has.

Since August 2008, Thailand’s government has been besieged by protesters who call themselves the People’s Alliance for Democracy (the PAD), although to Western thinking, democracy is a long way from their demands. What they are asking is to replace the one-man, one-vote system with one of appointed representatives chosen by social groups and professionals, and not to have them elected as at present.

A few days ago they took over the airport and the problems are escalating. In a country where losing face is to be avoided at all costs, neither side will give in.

What is the PAD

The PAD is a loose grouping of royalist, urban middle class business people, and socialites, who claim the current government is corrupt. They also make a more serious claim, that the government is hostile to the much-revered royal family. They have a hatred of the former P.M., Thaksin Shinawatra, ousted from power in 2006. Thousands of its supporters camped outside government house before moving to the airports at the week-end.

Who Heads the Current Government

The current government is headed by Thaksin’s brother-in-law and some members of his former party. They Party was elected in free elections, but the PAD does not accept its legitimacy.

Does the Government Have the People’s Support

Thaksin’s populist policies attract enormous support from rural areas, especially extremely poor Isaarn and the northern areas of Chiang Mai and Chiang Rai, to whom Thaksin gave a universal health scheme and cheap loans. These government loans have made a big difference to poor farmers. The PAD has claimed that the rural voters were duped into voting for the present government, an accusation that has incensed these voters, who feel it is a slight on their intelligence.

Airports Under Siege at Bangkok

The airports are important as key tourist transit points and it might be fair to think that as the International Airport was a pet project of the deposed, former P.M. Thaksin Shinawatra, the PAD feels a sense of righteousness about this. The Army chief, Gen. Anupong Paochinda, has urged the current PM, Somchai Wongsawat, to stand down and to call new elections. Some see this as interference from the army. Considering that it is the PAD who are breaking the law, a reprimand from the General may have had more results.

Where is Thaksin Now?

Thaksin moved to Britain when he was deposed but returned to Thailand after the election. Charges of corruption were then brought against him and his family so they fled once more, saying they would not get a fair trial in Thailand. He was recently found guilty of corruption and sentenced in absentia, and the Thais asked Britain to extradite him. He left tthe UK and is currently believed to be in Hong Kong.

What is the Current Political Situation in Thailand

Thai society is today divided as it has never been before. The rural poor now has a voice with which they are supporting Thaksin and the PPP party which won the most seats in last year’s elections. The PPP would probably win an election if one were called tomorrow, but the PAD would still retain the support of an important section of Thai society, i.e.State employees and the business section as well as the urban classes.

There are other equations in the mix, nuances of class and feudalism that are alien to the West and difficult to understand, as well as fear of the very uncertain future.

In a country that has already seen 17 coups, nothing can be ruled out.