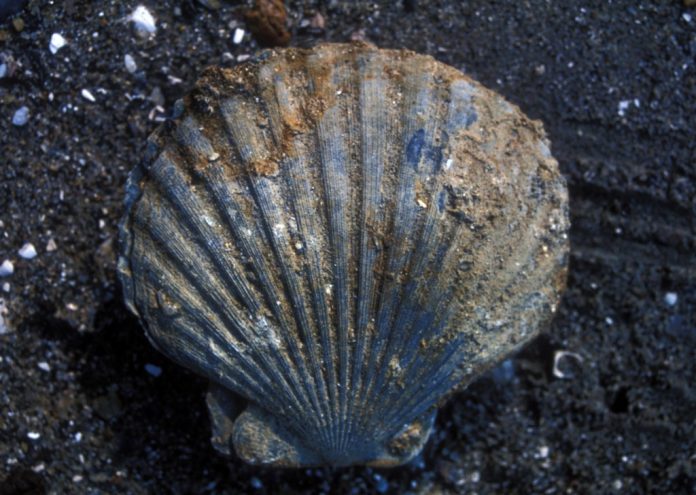 Virginia’s State Fossil, Chesapecten jeffersonius, is an extinct scallop and the first North American fossil described in the scientific literature.

The Pectinidae is a family of marine bivalves appearing in the geologic record from the Triassic Period through recent times (Holocene Epoch of the Quaternary Period). Perhaps the best known representatives of this group are the scallops.

These mollusks have been a popular delicacy for centuries, and in ancient times, people used the shells as scrapers, drinking ladles and bowls. Today the scallop shell serves as the familiar logo of Shell Oil.

First North American Fossil to be Described in Scientific Literature

In 1687 the English naturalist and physician Martin Lister published a drawing and description of a large fossil scallop in “Historiae Conchyliorum, Liber III“ This was the first time a fossil from North America was described in a scientific publication, though Lister didn’t assign a name to the fossil.

This wouldn’t happen until 1824, when Scottish naturalist John Finch collected a large assortment of fossil shells from around Yorktown, Virginia.

The specific name jeffersonius honors one of Virginia’s favorite sons, Thomas Jefferson, who in addition to being an accomplished architect and political leader was also a gifted naturalist.

A century and a half later, in 1975, Lauck Ward and Blake Blackwelder of the U.S. Geological Survey assigned the species to their newly named genus, Chesapecten.

The genus Chesapecten included more than a half dozen species living along North America’s Atlantic Coastal Plain from the Miocene through Pliocene epochs of the Neogene Period. The name literally means, “Chesapeake Scallop”, referring to the fact that the genus is best exposed in the Chesapeake Bay area.

Chesapecten jeffersonius, one of the largest species of scallops on record, lived about 4.5 million years ago during the Early Pliocene Epoch. Specimens of this robust bivalve are commonly found in fossil deposits near Chesapeake Bay and down into North Carolina.

For geologists, C. jeffersonius is an important biostratigraphic tool. Its occurrence is geologically limited to the Lower Yorktown Formation. This means that when geologists find samples of this species in the field, they know they are looking at a deposit that is Lower Yorktown in age.

In the course of his career as a paleontologist, Lauck Ward continued studying C. jeffersonius. As other states in the 1980s added fossils to their official lists of symbols (Ohio, for instance, recognized the trilobite Isotelus), Ward suggested C. jeffersonius as a good candidate for Virginia.

In 1989 Ward left the U.S. Geological Survey to work at the Virginia Museum of Natural History. Here, he escalated his efforts on behalf of C. jeffersonius. In early 1992, dozens of specimens he collected were mounted onto wooden frames and given to members of the Virginia General Assembly.

A few months later, local students matched this undertaking by collecting their own specimens and giving them to the General Assembly. These efforts proved successful, as the General Assembly approved a bill designating Chesapecten jeffersonius as Virginia’s state fossil. Governor Douglas Wilder signed the bill into law in 1993.

Today, Virginia’s state fossil is officially recognized under Title 1 (General Provisions), Chapter 5 (Emblems), § 1-510 (official emblems and designations), of the Virginia Code. This recognition is appropriate, considering the fact that Chesapecten jeffersonius is the first North American fossil to be described and also because its name honors one of Virginia’s most influential residents.