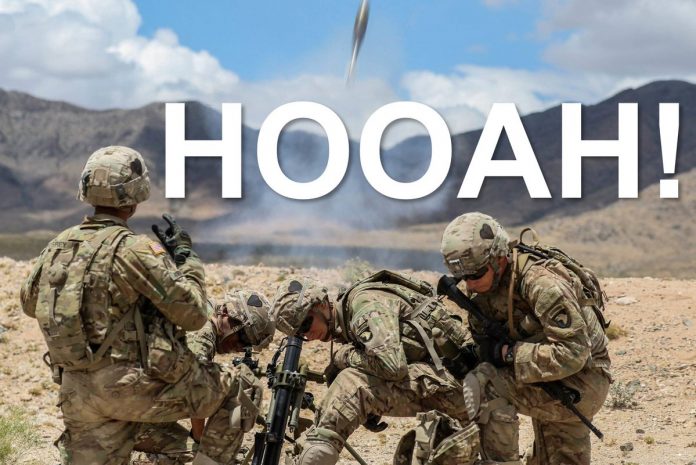 You hear it all the time, some weird kind of sound them military people use all the time. Like it actually means something. Are they just grunting? What the heck is “Hooah?” Well, as a member of the military, and, of course, a prior civilian who was as completely baffled as the next person as to this “Hooah” thing, I’ll tell you what it is. It’s a word used generally as a way to say “understood” or “I hear ya.” The exact origins of Hooah are unknown, though some believe it is derived from the acronym HUA, meaning “Heard, Understood, Acknowledged.” However, those are the nice definitions.

As any other military person will tell you, we’re not usually that happy about what we’re being told. If we have a Sergeant come up and tell us “Soldier, you are worthless!” what’s our response going to be? A well-resounding “HOOAH, SGT!” of course. Is that to say we agree with them? Of course not! Why would we call ourselves worthless? That’s just ridiculous.

We usually have higher self-esteems than that! However, any soldier that started out at the bottom, including myself, knows that you never tell a superior officer you think they’re full of hog-wash. That’s obviously a form of suicide and, generally speaking, we frown upon suicide in the military. It’s much more fun to live, you understand.

So what does it mean if we say it but we’re not feeling motivated or happy about what we’re “hooahing” to? Thought you’d never ask. While I was in training with the Army, I composed this list as a general definition to the word “hooah.” Needless to say, I was in a rather unmotivated mood for the day and wanted to express what I felt was the true meaning of the word I’d used at least one thousand three hundred and twenty-seven (1327) times that morning already with no end in sight.

Thus, the following are what I came up with:

The Definition of the Word Hooah

a) Whatever; Sure; If you say so
b) If I have to.
c) You are smoking some serious crack
d) I got it already. Stop talking.
e) Blah, blah, blah
f) Moron.
g) Stupid (a stupid act. ex: that was… hooah.)
h) Used to show sarcasm/fake enthusiasm or motivation
i) I’m listening to the words coming from your mouth, but I’d prefer it if you’d shoot me.
j) Sometimes used in times of real motivation (note: this is rare)
k) Motivated (!) (ex: Hooah, SSG!) Usually a lie (meaning the person is not really motivated and/or interested in the SSG’s motivation level).
l) I agree completely with the conclusion that we are surrounded by idiots
m) Confusion abounds …? (as in, I have no idea what you’re talking about, but I’m going to pretend I do)

The next time you hear some military person say “Hooah!” try and figure out what they’re really saying. If you have the chance to listen to a portion of the conversation, you’ll likely have no problem understanding the true meaning of that motivated-sounding “Hooah.” In example, if the conversation goes something along these lines:

SSG: We are going to blow these people out of the water! To do that, we have to be the most motived, dedicated company this Army has ever seen! Our Soldier’s creed says physically and mentally tough! You have to be both! Now get in the front leaning rest! (also known as the push-up position)

Where the soldiers being spoken to respond with “Hooah, SSG!” and get in said front leaning rest position, then they are probably really thinking something along the lines of “SSG, you are smoking some serious crack. Can I go back to my room now? I don’t really want to do more push ups.”

Now if the conversation goes somewhere along these lines:

Where the soldiers being spoken to respond with “Hooah!” then they are most likely using it as a way of showing real motivation. Who isn’t motivated when told to go home for the day?

As a closing note, I would just like to say that our superior officers in the military are not slow and have not missed any memos. They know exactly what hooah means in any given context. Some even forbid us to say Hooah when they’re reprimanding us because… well, they know. They probably did the same thing when they were our rank.