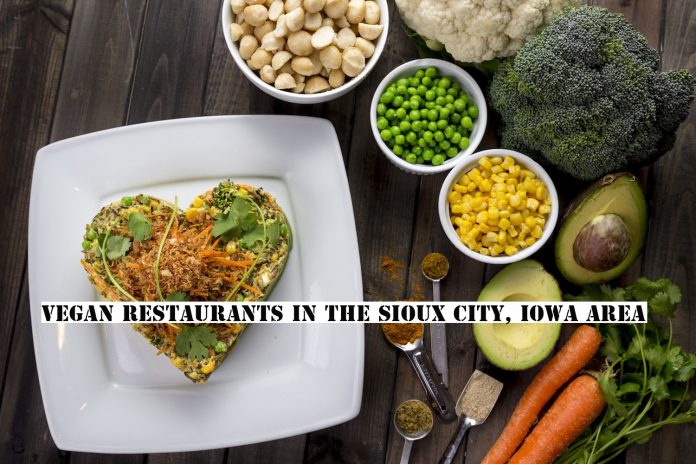 The Sioux City, Iowa, area is home to BPI — the company at the center of the pink slime controversy — and isn’t exactly a vegan mecca. But it is possible to dine away from home and not only maintain a vegan diet, but discover some tasty food in the process!

Diamond Thai – This is by far the best choice for vegan dining in Sioux City.

There are already many vegetarian and vegan options on the menu, but they will also cook anything vegan to your specifications. The hot sauce is to die for, and while the decor is beyond weird and tacky, the friendly service makes for a great atmosphere.

Make sure that you specify spiciness before you order, otherwise your food will be either bland or 12 alarm hot.

Red Robin – Yes, Red Robin is a burger chain, but you can order any burger on the menu and sub a vegan Boca burger! The steak fries are not only bottomless, they are also vegan! Ask them to hold the Red Robin seasoning and season them yourself, because the RR seasoning apparently contains egg.

Depending on how particular you are, you can also ask for the burger to be microwaved instead of cooked on the grill where the meat is also cooked. Add a cocktail and you have a delicious vegan meal.

Chipotle – Chipotle is somewhat of a vegan mecca, and Sioux City is lucky enough to have one! Most of the Chipotle menu can be ordered vegan (obviously, aside from the meat and cheese options) and none of their food contains eggs.

Chipotle now offers a sofrita option at all of its locations nationwide, which is tofu based and vegan! A rice bowl with hot salsa, black beans, and a Corona is my go-to order.

I fell that an article about vegan options in the Sioux City area wouldn’t be complete without mentioning that a mere hour-and-a-half away Isa Chandra Moskowitz, of Post Punk Kitchen fame, is opening a vegan restaurant in Omaha this spring.

I have made many recipes from her blog, and they were all delicious, so I can only imagine the tempting fare that will be offered at her restaurant! There is also an Indian restaurant in Omaha which not only offers vegan options, its a choice not available in Sioux City.

It is definitely possible to find a good vegan meal out in the Sioux City area, even if the options aren’t plentiful.