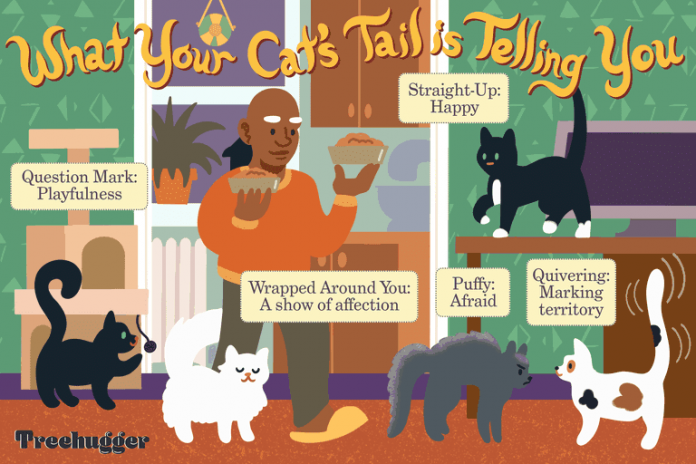 Cats use their flexible tails to communicate a variety of things, ranging from friendly greeting to impending attack.

Understanding “tail talk” can give insight into a cat’s mood and the way in which he is likely to behave in the near future. Cats use the following tail positions to communicate feelings and signal intentions.

Cat Stands with Tail Upright and Tail Tip Curved Over

Some believe that this “question mark” tail stance is a neutral position, signaling indifference, while others view it as a sign that the cat is curious or interested in something, or in a playful mood. With this position, the tail may turn back and forth as the cat walks.

This is the tail position cats use to greet individuals they like or in anticipation of something good. Kittens use it to greet their mothers, particularly when their mothers are bringing prey home, and adult cats may adopt this posture to request food from their human “parents.”

In unfixed male cats, this often indicates the intention to spray an area in order to mark territory. Neutered males may go through the spraying motions, including backing up against objects, without actually spraying. Tail quivering can also represent a friendly greeting, and some believe that it also signifies mild excitement.

A gently flicking tail indicates that the cat is casually checking to ensure that there is nothing behind him. However, if the tail is flicking aggressively or thumping, the cat is usually indicating irritation, particularly if there is a person or another animal sitting behind him and he would like that individual to move.

Quick, smaller tail flicks usually express emotional conflict, indecision, or irritation, whereas broader, fiercer swishing, particularly if the cat is crouching, growling, or showing other signs of aggression, may indicate the intention to start a fight. A gentle movement from side to side with the tail at half-mast usually conveys mild interest in something.

Cat Stands with Fluffed Tail Pointing Downward or Straight Back

In this case, the cat has decided to behave aggressively toward an opponent, either because he is afraid and wishes to launch a preemptive strike or because he feels dominant and wants to defeat a rival. When the tail is straight, the cat is more likely to be feeling dominance aggression, whereas when it is down, he is probably displaying fearful aggression. The fluffed tail is designed to make the cat appear larger so that he can more easily intimidate his opponent.

Cats often lower their tails right before attacking. Because a cat’s tail makes a convenient target for his opponent, after he has launched himself at the offending animal using his tail as a rudder, he will again tuck it downward to protect it once locked in battle.

The tail held low or straight back in combination with flattened ears and puffed fur indicates a strong likelihood of attack, but a tail tucked between the hind legs without signs of aggression may indicate worry, defensiveness, or submission. A female cat in heat may take a similar position, crouching with raised rear end but with her tail off to the side, which indicates sexual receptivity.

Cat Stands with Arched Back and Arched, Upright, Puffy Tail

This position, which resembles the feline silhouette often used for Halloween decorations, indicates a frightened cat that can’t decide whether to launch an aggressive preemptive response or stay on the defensive. Young cats are particularly likely to use this body posture when confronting dogs.

Cat Crouches with Tail Straight Behind Him

This is the position cats adopt when they are stalking something, which may be prey, a favourite toy, other pets, or their human companions. Usually the tail will twitch lightly in anticipation of pouncing.

Cat Sits with Tail Wrapped Against His Body

This position indicates contentment and comfort. However, a cat that is intimidated but not submissive may adopt this posture as well. The difference can usually be seen in whether the cat’s facial expression appears calm and relaxed or wary.

For more information on cat communication and behaviour, see What Your Cat Is Trying to Tell You, Types of Cat Aggression, and Why Does My Cat Do That?

What is the BLM’s priority? – Portland animal rights

What is a Hedgehog? The habitat of this species