IowalumA Q&A blog Shared by Iowa Students & People
Home Health What is a Bruise or Contusion? The phases and how to treatment 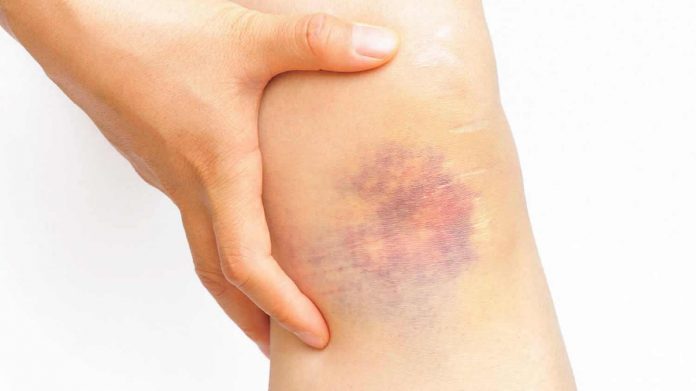 Ever wondered exactly what a bruise is? Here is information on how a bruise occurs, the types of bruises and the various treatments.

Bruises occur when a person has suffered a bump or knock to a certain part of their body. A bruise, sometimes called a contusion, appears because small veins and capillaries in surrounding tissue break, causing blood cells to leak into the skin. The black, purple, blue or yellow color is caused from the blood vessels collecting under the skin.

There are three types of bruises. These are:

Intramuscular bruising is when the blood vessels of the muscle are damaged. This type of bruise is more painful then subcutaneous bruising as it is deeper and often results from a much harder knock than a subcutaneous bruise, and may take longer for the bruise to disappear.

A periosteal bruise is when the blood vessels as well as the outer layer of bone (cortex) is damaged. This type of bruising is very painful and if a large amount of the cortex is damaged, it may actually be a bone fracture, so that needs to be ruled out by a doctor who may take x-rays.

This type of bruise would occur after a very hard knock and the bruise would take much longer to heal than a subcutaneous or intramuscular bruise. A doctor would need to determine how much damage has occurred to the cortex so he may treat the injury accordingly.


The Healing Process Of A Bruise

As a bruise heals, it will undergo a series of color changes. This process is the body metabolizing the blood cells that have collected in the skin.

The color of the bruise is an approximate indication of the age of the bruise, however, a more serious bruise like a periosteal bruise, will take longer to go through the phases (What does a bruise look like, and why does it change color?, MedicineNet.com).

Why Some People Bruise More Easily Then Others

If a person were taking medication that reduces blood clotting (blood thinners), they would be more prone to bruising, as would anyone suffering from blood cell abnormalities or blood clotting abnormalities (Why do bruises occur more frequently in some people than in others?,MedicineNet.com).

Treatment Of A Bruise

The treatment of a bruise is to ice the area for approximately 10–15 minutes after the injury has occurred. Raising the injured part of the body to allow the blood to flow back to the heart may help and a bandage can be applied to minimize the swelling, once the ice has been removed.

If the skin bruises easily, it could be potentially due to a Vitamin C deficiency (Bruising, Blackmores.com.au), however, it is best to visit a doctor to rule out anything more serious if bruising is frequent.