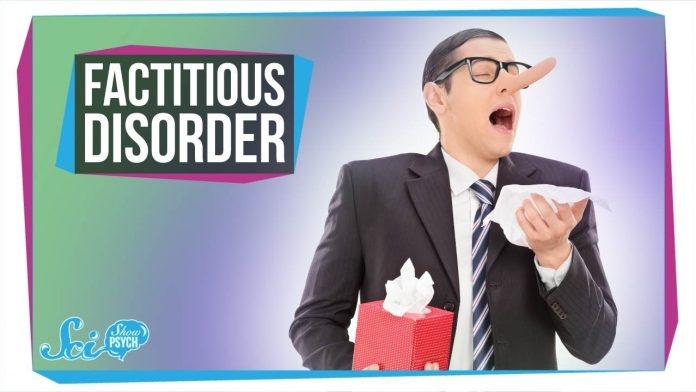 Factitious disorder is sometimes called Munchausen’s syndrome. It is named after the Baron Von Munchausen (1720-1797), who supposedly told many far-fetched stories about himself and his life.

Factitious disorder should be distinguished from other psychiatric disorders with physical features (such as conversion disorder and somatoform disorder), and from cases in which the patient is malingering for financial or personal gain.

The Diagnostic and Statistical Manual of Mental Disorders, Volume Four, Text Revision (DSM-IV-TR) outlines the following criteria be met for a diagnosis of factitious disorder:

Patients with factitious disorder may feign solely physical symptoms, solely psychiatric symptoms, or a mixture of both.

Patients may inject substances, ingest drugs or other substances, or otherwise manipulate medical tests to feign symptoms consistent with the illness they claim to have.

Red Flags That Illness May Be Factitious

It can take time to identify a patient with factitious disorder, as doctors generally want to believe their patients are telling them the truth. However, there are certain red flags that can alert health care professionals that the illness they are dealing with may be factitious. Some of these are:

Patients in whom factitious disorder is suspected should receive a full psychiatric evaluation, and be assessed for other psychiatric disorders.

Patients with factitious disorder may also require further medical treatment for the methods they used to induce their symptoms, or for complications from previous medical procedures.