IowalumA Q&A blog shared by Iowa students
Home Education What is Haiku? Elements of This Type of Japanese Poetry 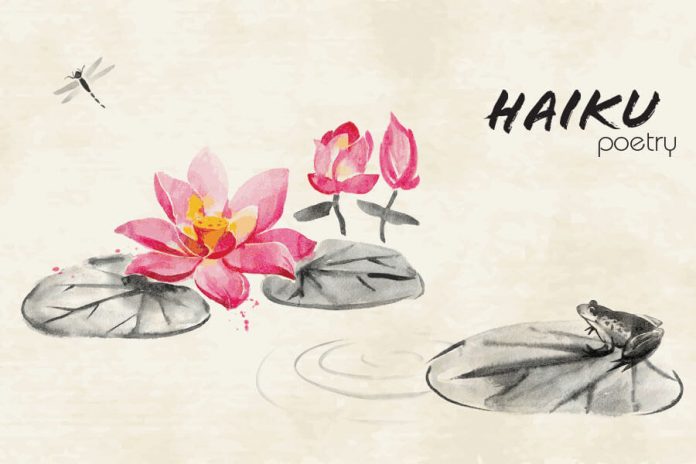 English language haiku is a version of an esteemed form of Japanese poetry that has been around for centuries; but in its present form, it has been around since the late 1800s. At first, the poetic form may appear to be simplistic, but it is, like all forms of poetry, condensed and often the ideas are layered.

Haiku is not a rhyming form of poetry; it is known instead for its syllable count. The inherent rhythm doesn’t depend upon rhyme; rather, the form imposes a type of rhythm on the poetry.

While there are variant forms of haiku in the United States, many haiku follow a strict syllabic form. The haiku consists of three lines. The first line has five syllables; the second has seven; and the third has five. It has seventeen syllables total.

A lot of times, haiku focuses on a season or nature, and often the imagery in the poem is taken as a metaphor. Richard Wright was an American poet who wrote hundreds of haiku, but unlike traditional haiku poets, his use of nature was juxtaposed against humanly concerns.

Haiku poetry is very often enjoyable to write because it feels liberating. Certainly, working with fewer words may not seem freeing at first, but having to keep ideas tight and make images work on several levels can be exciting for poets wanting to try something new.

Not all American poets focus on using haiku as a nature form; some use it as merely another type of poetic form. Some poets like to write more than one haiku at a time, creating a chain of several haiku to express one idea instead of one on its own.

It’s best for the poet to decide on either a specific image or idea to communicate or allude to in her poem before beginning, and if she has an image she wants to use as a metaphor, it’s even better. Sometimes, though, the best haiku are simple yet lovely.

If a student wanted to write a haiku about how spring is like youth, she might do some freewriting to get a lot of her ideas on paper before putting her haiku together. Perhaps another student would decide he wanted to use writing about seasons to emphasize his environmental concerns.

May shouldn’t be hot.

Where has the rain gone?

In his poem, he references the month of May, alluding to a season, spring. He then loads the haiku with imagery, tactile words like hot, dry, and parched, visual words like yellow, grass, flowers, and rain. Finally, he has his poem arranged by syllables: five for the first and last lines and seven for the middle line. Notice that the syllables as well as the condensed form enforce an ingrained rhythm.

Haiku is a Fun Form of Poetry to Write

Not all poets will always want to write haiku, but it is another form of poetry that can be enjoyable to try. Many poets stray from the strictness of the syllables, but it can help poets focus on tightening their form and images, especially poets used to working strictly in free verse.

Poets who enjoy writing haiku may also like an American version of another type of Japanese poetry known as tanka. Like haiku, tanka is arranged in syllables and usually involves one image or idea.

Poets will find that sometimes it’s best to explore new expressions to break themselves out of expected patterns or learn new ways of approaching a subject. Haiku is one of many ways a poet can “play” while growing as a writer.