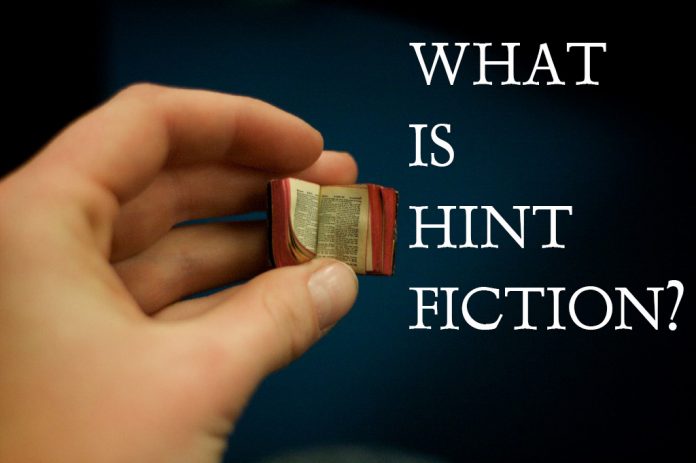 Stories in 25 words or less. A new genre of written fiction, a brilliant way of involving readers in the process of creating, or just pure laziness?

Every innovative breakthrough in any field of art has to fight hard for approval before being appreciated. Who knows how many never made it through? What we do know is that flash fiction — commonly defined as a story in 1000 words or less — has been with us for years now, and it looks like it’s here to stay.

Recently, various names such as micro-fiction, nano-fiction etc started floating around, referring to writings of 500 words or less. Then the 140-character long twitter fiction showed up. Yes, driven by the twitter format.

What Is Hint Fiction?

While flash fiction is usually defined as a story under a thousand words, a quick definition of hint fiction would be: a story in 25 words or fewer, which points to a greater, more complex story. This is the definition given by Robert Swartwood, the man who coined the term in 2009, a term which has since been spreading around more and more writer’s blogs, communities, online and print magazines.

In describing the essence of hint fiction, Swartwood refers to Hemingway’s very short story, consisting of only six words: “For sale: baby shoes, never worn.” Starting from this example, he sets the foundation of the idea that less is more, that is, by having less detail to work with, the reader will actually put more of their own self into the narrative, thus making a larger contribution to the piece. While risking a bit of an exaggeration, we can classify hint fiction as nearly the ultimate ‘opera aperta’.

Flash Fiction and Hint Fiction : Offsprings of the Era of Condensed Quantity

New genres are usually the babies of the social, historical, spiritual background of their time. Just like free verse: it appeared when nothing seemed to make any sense.

It is safe to say that the twenty-first century, as we know it so far, is the era of quick intake, reduced quantity and condensed content.

We take in the equivalent of a hamburger, in a vitamin pill the size of a bug. The journeys that would take weeks a few hundred years ago, now take hours, maybe minutes. Someone far away can receive our message within just minutes of sending it out. We drink instant coffee and tea with condensed milk. We have no time for anything superfluous, we want everything neat, prepped and to the point.

And that is what hint fiction and its older brother, flash fiction, offers the twenty-first century reader. An entire world of a story, devoid of all unnecessary words, in a nutshell. Except, this time, the nutshell isn’t there either. Only what is strictly necessary.

However, the main difference between hint fiction and flash fiction is not the length. The basic innovation is the idea of “hinting”, pointing toward something greater, rounder, more complex, something unexpressed, but undeniable.

As Robert Swartwood puts it, “the reader is forced into filling in the blanks of the story.” The blanks, which are larger than the existing part, but the essence of which is contained within those 25 words, or fewer. This is how the reader becomes involved in creating the story, before they even know it.

What Is in Store for Hint Fiction?

We may be looking at a new genre and tradition about to unleash itself in the world of readers and writers. On the other hand, it may turn out to be nothing more than a passing trend, in which case people will soon be bored of it. Only time will tell, but its recent and increasing presence online and its début in print seems to point toward the former.

Until this new type of fiction sets its own tradition and pushes out its own big names, the winning entries of the Hint Fiction Contest, editions 2009 and 2010, hosted by Swartwood should provide a better idea of what a good piece looks like.