IowalumA Q&A blog Shared by Iowa Students & People
Home Animal What Is Honey? How Is Honey Made? A Cursory Introduction to Honey 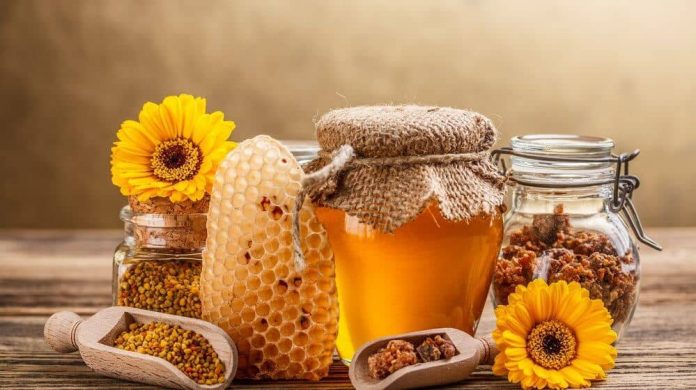 Honey doesn’t only have a unique taste as a sweetener but also has other properties and uses. The process by which bees make honey is also very fascinating.

The fact that honey is a popular sweetener produced by bees, is all that some people know about honey. However, there are more interesting details to learn about honey. Honey is a main ingredient in many folk remedies, health, sleep and beauty aids, cosmetic products and cooking recipes .

Honey is made through a careful and very curious process. Each time a bee visits a flower, it uses its proboscis to extract nectar. This nectar is then stored in its stomach. The bee repeats this process until its stomach is full. While it is in the bee’s stomach, the nectar is subject to the action of enzymes and proteins which help to convert it to honey.

Upon re-entering the hive the bee regurgitates the honey into one of the many cells in the comb. This is then repeated by the thousands of worker bees until entire combs have been filled. This process of storing honey is more or less done to sustain the hive in tough times such as winter. Bees also help to insulate the hive. They are known to fan their wings to allow excess water to evaporate from the honey, so that it is cured and ready for storage. After this process the honey is then sealed off by bees-wax.

Humans may take advantage of honey especially that which is produced by European bees, as they’re renowned for producing surpluses. Human harvesting of honey has been depicted in ancient cave paintings, Egyptian hieroglyphics and in early Greek cuisine. Bee keeping was also an important economic activity in the Roman empire.

Honey, especially raw honey must not be eaten by infants because of the risk of death or paralysis from botulism. Interestingly, there’s a type of honey termed as wild honey by certain farmers. This honey may be obtained from flowers like rhododendron, azalea and those from the laurel family. If eaten it may harm you by causing numbness, vomiting and muscle weakness. Fatal incidents are however rare.

This serves as a cursory introduction to honey production by bees and by extension its continued widespread appeal to humans through the generations.