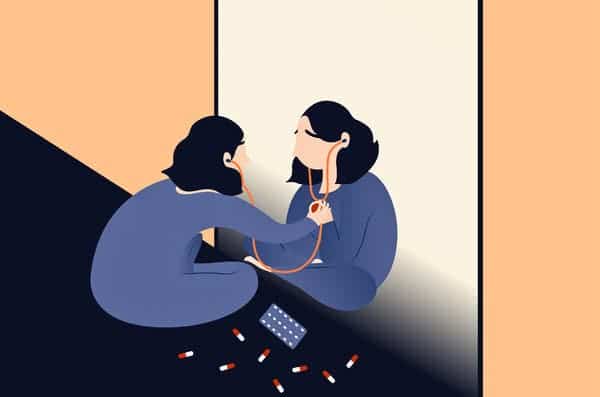 Those suffering from hypochondria live with the fear that they have an undiagnosed , life-threatening disease. Hypochondriacs may misinterpret or exaggerate the importance of normal symptoms–for example, a headache means an impending aneurysm, and a stomachache is a tumor.

It’s important for friends and family members to remember that the hypochondriac is not making up symptoms for attention or malingering. The hypochondriac patient truly believes that s/he is seriously ill, and is desperate to find a doctor who can diagnose that illness.

While some hypochondriacs go from doctor to doctor trying to find answers, others are so convinced that they are ill they refuse to see a doctor in order to avoid hearing bad news. Other hypochondriacs may not be worried enough for constant doctor visits, but carry the constant, nagging worry that they are seriously ill.

What all hypochondriacs have in common is that their preoccupation with their health impacts their life negatively.

Most people are able to ignore the body’s occasional unpleasant sensations, but doctors are still not clear on why some people focus obsessively on symptoms as a sign of serious illness. Some doctors speculate that hypochondria is a form of obsessive-compulsive disorder.

Some doctors also believe that the physical symptoms of anxiety–racing heart, sweating, increased breathing rate, and so on–may contribute to the hypochondriac’s belief that they are severely ill.


Hypochondria occurs equally in both men and women, but there are some factors that seem to increase the possibility of developing the disorder. These include having had a serious illness in childhood, currently having friends or family members with a serious illness, the death of a loved one, or having an anxiety disorder.

Hypochondriacs suffer a high level of anxiety about their perceived health problems, which can lead to depression, difficulty at school or work, and difficulties in their interpersonal relationships.

As well, hypochondriacs are at risk of complications from the various medical procedures they may put themselves through, and they may experience financial hardship due to overwhelming medical costs.

Hypochondria is often a chronic condition, and is treated through a combination of therapy and medication. Many hypochondriacs benefit from cognitive behavioral therapy, in which patients learn to recognize and confront the false thinking that triggers anxiety. Patients may also benefit from exposure therapy, an anxiety treatment which allows patients to confront their fears in a controlled environment.

Both SSRI and trycyclic antidepressants can be used to treat hypochondriacs, but medications should be used with caution: the side effects they can cause may give the patient new symptoms to focus on.

Hypochondriasis impacts not only the life of the sufferer, but also the lives of their family, friends, and health care professionals. Although it can be a difficult illness to treat, the resulting freedom from anxiety, and improved interpersonal relationships are well worth the effort.