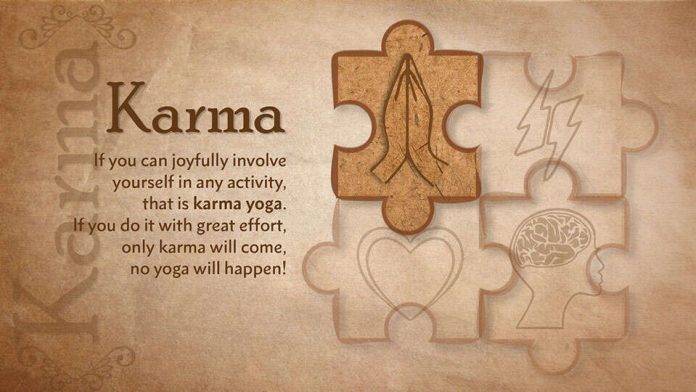 Karma is often spoken about these days as a sort of cosmic balance sheet that keeps track of our good and bad deeds, and rewards or punishes us accordingly. It is often heard in conversations when people want to assure us that someone who has wronged them or others will not get away with their misdeeds. For some reason it is less heard about in terms of rewarding a person for their compassionate and selfless good deeds. However this understanding of karma is somewhat skewed and not entirely accurate. If we want to truly understand this concept, we must look deeper and investigate its ancient origins as well as how it relates to our modern understanding of physical law.

The Origins Of Karma

The word karma is from the ancient Indian language known as Sanskrit, and translates roughly into “action”. It is a concept that refers directly to the workings of the physical universe and everything within it. It encapsulates the entirety of cause and effect, and describes the mechanics of how things work. It originates within a tradition of spirituality called the Shramana, which is the name attributed to the wandering ascetics who pre-dated all of the known Hindu and yogic philosophies and religions. Their philosophies and practices were adopted by many people, and over the centuries as other traditions developed, some of the Shramana’s core concepts were changed and embellished.

While the subsequent traditions that have popularized karma have somewhat divergent views, it is possible to find a common ground as well, particularly if we are willing to look at the concept with fresh eyes and find an understanding which is relevant to our lives today. We can say that both gravity and inertia fall under the umbrella of karma, as well as every other physical law. This is the basic understanding that we must look at first in order to grasp the significance that karma is accorded. It is not actually relevant to morality in terms of how good and evil is defined by various people, as we can see that what is evil for the Muslim extremist is not the same as what is evil for the Christian fundamentalist.

Is Your Karma Good or Bad?

The reason why karma has been described as good or bad is due to the understanding of how karma will affect a person according to the actions they have performed. In regards to the activities of people, it is understood as the chain of events which happen in our lives. It is both the cause of events and also the effect of events. It is continuous in this way, in that karma begets itself repeatedly. It has a momentum to it, like a snowball rolling down a hill and picking up more snow and becoming heavier as it goes along. It describes the actions we perform as having a distinct effect on the events we will experience. So if you are acting out in anger on a regular basis, you are more likely to experience the results of this, whatever they may be. Or if you are giving freely of yourself and helping people as much as you can, you are more likely to experience the results of this. Karma describes the mechanics of chance and possibility in this way.

While it may seem silly to us as modern people to describe all mechanical physical laws of causality and deterministic motion with a singular concept like karma, we must recognize that the origins of this idea are derived from people who lived many thousands of years ago. At the same time, it is beneficial for us to respect the deep understanding of the basic and fundamental laws of reality which were uncovered by these ancient investigators, who were the most respected scientists of their day. They did not have the kind of external machinery and computer technology which we now possess, however they had developed their own internal technologies and practices which were quite sophisticated and which may be as unknown to us as electronic computers were unknown to them. As humanity moves forward into the future, we are slowly discovering measurable evidence of many ancient metaphysical concepts. The sooner we can bridge that gap, the sooner we will be able to fully appreciate the depth of knowledge that humanity has uncovered and forgotten throughout our history on this earth.