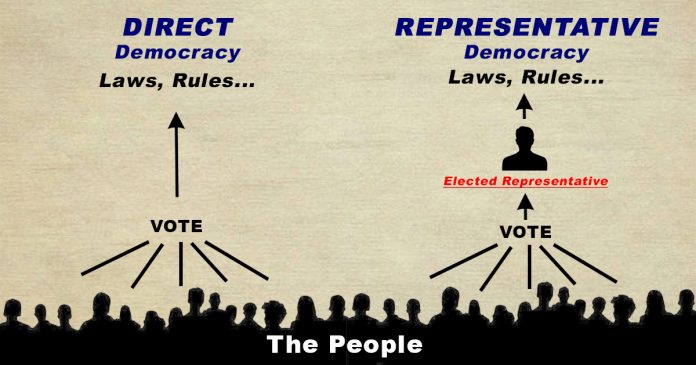 Although there are many different forms of the Democratic model, Representative Democracy is probably one of the most known. In many countries today, this model or a variation of it is used to elect officials and govern the state. As such, it is important to review this model in full while also comparing it to Direct Democracy.

Definition of a Representative Democracy

Essentially, the Representative Democratic model allows all citizens within a state to elect representatives that will sit at the legislature. This gives them the authority to approve legislation and control the funds of the Government.

It was first developed during the ages of monarchical rule. Monarchies wanted to impose new taxation regulations upon certain areas of the state, and in order do so, support from a group of prominent people was needed.

As time progressed though, the power that the monarchy had shifted to the representatives. Governing was therefore the responsibility of those elected. Still, only certain individuals could be elected and many citizens did not have the right to vote. In the twentieth century, these rights were gradually expanded so that all individuals could participate in the electoral process. Hence, the truly Democratic Governing system today.

Even though there are a variety of different representatives, there are only a few that have considerable amounts of power. The individuals that make the Governing decisions are elected members of the executive. The other representatives are there with limited power. They debate legislation that the executive introduces and either pass or block it.

More generally than not, representatives are members of a political party. Thus, elections are battles between political parties and those who are elected will usually vote in accordance with their political party’s beliefs.

An excellent example of the Representative Democratic model is the Parliamentary system. Elected officials are in the legislature, which is the House of Commons in Canada. The executive is composed of the Prime Minister and his or her Cabinet, which oversee and conduct governing of the state.

The executive is within the legislature, and must maintain a majority support of the elected representatives to avoid getting taken out of office.

In a way, the definition of a Representative Democracy could be summed up by saying it is an Indirect Democracy. The reason being is because citizens within the state do not make the Governing decisions directly.

Rather, they are just selecting individuals to make decisions on their behalf via the electoral process. Plebiscitary Democracy uses many fundamental elements of this Democratic model, but combines these selected features with tools associated with Direct Democracy to give citizens more power.