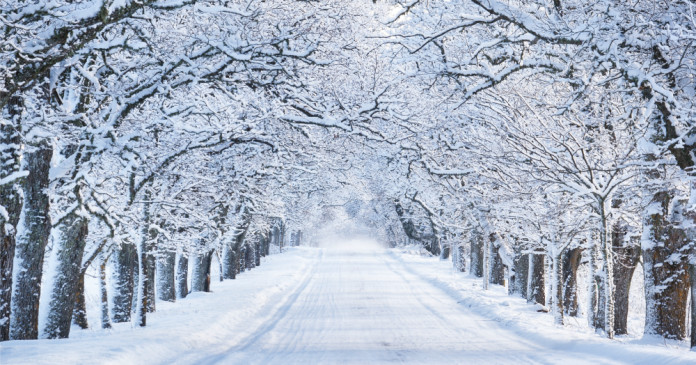 In the winter high altitudes, and much of the far northern and southern hemispheres, are covered with snow. To those of us who live in snowy areas snow is a natural occurance. Many areas of the world, however, never see snow because it does not get cold enough. Snow is frozen rain, and it covers us with white. As most everyone know, rain turns to snow at 32 degrees Fahrenheit, or 0 degrees Celsius. But what is it like to live in the snow?

Snow is cold because it has to be under 32 degrees in order to form, but the experience of living with snow isn’t that cold. In fact, snow can be a great insulator. If stranded out in the woods survivors will dig down into a snow cave and be relatively toasty until morning. Traditionally, Eskimos lived in houses made of snow. It’s not at all like kicking back in front of a roaring fire, but it is warm enough to stay alive.

The best way to imagine what snow is like is to start in the late fall with the first snows as they come down and start to fill the world with white. In the fall it is just beginning to get cold. There may even be a few rains keeping the grass green, and a few flowers growing. Then one day temperatures will drop with an overcast sky, and the rain turns to white flakes drifting from the sky.

Fall snows are wet with big flakes. They start dusting the ground, and sticking with little white tentacles to twigs on the bare trees. If you stand out in the snow and stick out your tongue you can catch snowflakes as they fall. They taste like a little drop of cold water.

Wet fall snows smoosh as you walk. It’s full of water and will seep wet into your shoes if they are not waterproof. A wet snow is slippery and can drag on your feet as you walk. This is the perfect snowball and snowshoe snow. It clings wonderfully into balls. If you start rolling a ball along it picks up snow as it goes, getting bigger and bigger until you’ve rolled up a snowman body! Make three of those, stack them up and give the top one eyes and a mouth, and you’ve created a snow companion who will live until the next warm day.

As fall turns into winter, it gets colder. Colder snow is dryer with small flakes. Walking in cold dry snow is totally different. Now that it is colder the wet snow has turned to ice underneath, with dry snow clinging to the top of it. The old wet snow is very slippery now that it has iced up, but dry snow on top creates traction.

As you get more familiar with snow you can tell the outside temperature by the crunch as you walk. Ten degrees Fahrenheit is a nice crunchy snow. But zero or below is the best. When it is nice and cold snow is beautiful, crunchy and pure. By this time of year there is a nice covering. The snow is thick and piled on fence posts, roofs and the branches of trees. This is when people in the north are singing songs about wishing for a White Christmas!

By January, some parts of the Northern Hemisphere are covered in snow and cold. This is when snow rules the world, and everything is white and pure. When the sun comes out in January it’s so cold that the sun’s rays do not melt the snow. Instead the sun sparkles and glistens like a fairy land all around.

This is the kind of snow that is perfect for skiing, sledding and fun! Cold midwinter snows are slippery and deep. On a good snow year you can walk through snow up to your knees. You’ll spend most of your time out in the snow shoveling for a place to walk and to get your car out of the driveway.

Clof temperature snows make terrible snowballs and snowmen because it doesn’t have enough water to stick together. The snow is so dry it falls apart in your hand.

Now that we are further through the year each day gets longer, and the sun’s rays get warmer. During sunny days it starts melting the snow and turning it wet and sticky again. Spring snows are deep and full of layers. If you stick in your hand, or dig down with a shovel you can see where snows have come down, been melted on the top leaving a crust and then covered with another layer. There will be numerous colored stripes in the snow.

Spring snows can be so sticky that it clings to boots or skis making each step heavy. Spring snows in some places often come in deep and thick. We are back to perfect snowball and snowman snow again.

Finally, the days are getting warm enough to start melting off all the snow. In the north, it melts first on the south slopes, and other places where the sun hits more often. Sometimes the days will be warm enough that clouds will drop rain and not snow, pelting snow piles with melting water. Places with drifts and lots of shade will still stay deep in snow for another month. But now the snow is grainy and dirty; like it’s full of little ice pellets.

Grass starts growing again, even with mounds of snow, and certain flowers will peek forth with petals. Eventually it is all gone, and we are surrounded by green again, waiting for summer to appear.

Finally, in summer, everyone forgets completely about snow, except perhaps on a really hot day when we wish we had some around!

If The World Warms

A warming world is dangerous for snow and has tremendous effects on ecosystems. Though many people are afraid of snow, and think it is dangerous, nasty and cold, it is actually one of the balancing forces of nature that keep northern and southern climes in balance. Snow is useful and beautiful, and can also be a lot of fun!