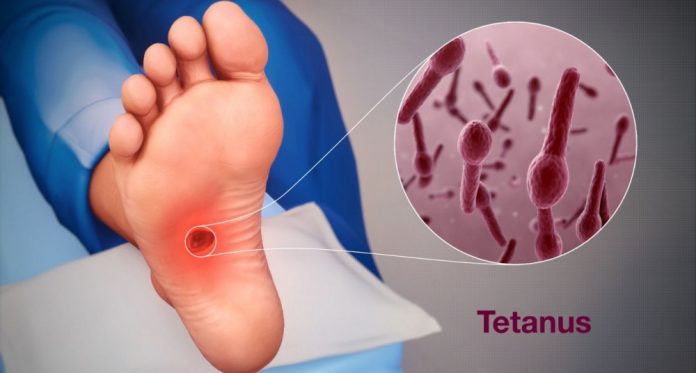 Bacteria that belong to the genus Clostridium are widespread throughout many environments. Most of them are relatively benign, but there are a few which cause major health problems ranging from severe diarrhea to gas gangrene to one of the most fatal disorders known to humans, tetanus.

The bacterium Clostridium tetani only grows in an anaerobic environment; that is one devoid of oxygen. It cannot grow successfully when it is in the presence of oxygen.

Within the bacterium is a protein (tetanus toxin), which appears to serve no apparent major function for the bacterium, but when it is released inside of an infected wound can ultimately cause the massive blockade of all muscle relaxation in the infected person.

How Does Tetanus Toxin Work

When the tetanus toxin is released from the bacterium, it gets cleaved into two associated fragments and it is able to bind to and be transported within the nerve fibers outside of the central nervous system back into the nervous system. When it is transported up into the spinal cord it begins to cause its hallmark problems.

The toxin is actually an enzyme known as a protease, it can cleave specific proteins. Unfortunately for someone infected with the bacterium, one of the major sites of action for tetanus toxin is to cleave a protein important for the release of neurotransmitters by inhibitory neurons in the spinal cord. These inhibitory neurons normally dampen the stimulation of motor neurons, which are responsible for regulating the contraction of skeletal muscles.

What Happens When You Get Tetanus

Once the toxin is able to exert its effects, inhibition of motor neuron activity is prevented. One of the early signs is the unabated contraction of the masseter muscle. This is one of the major muscles involved in closing the jaw. As a consequence of this, the jaw becomes closed in place and thus the origin of the term ‘lockjaw’.

Once the toxin affects enough motor neurons, muscle contraction throughout the body is no longer inhibited. Since typically the strongest muscles are along the back of the legs and upper body, spasms can cause the body to be contracted into a bow shape, with only the heels and the back of the head touching the surface on which the person lies. This gives rise to another name for tetanus, ‘bowstring paralysis’.

Can Tetanus Be Prevented

Once begun, tetanus can be difficult to combat. Treatments involve a range of interventions up to and including placing a breathing tube and mechanically ventilating the patient. Therefore, the most reasonable choice is being able to prevent it from happening in the first place.

Fortunately, the isolated toxin can be subjected to chemical treatments and becomes incapable of causing illness (tetanus toxoid). In this form, it can be used successfully as a vaccine that allows the person immunized with it to generate antibodies to fight its effects.