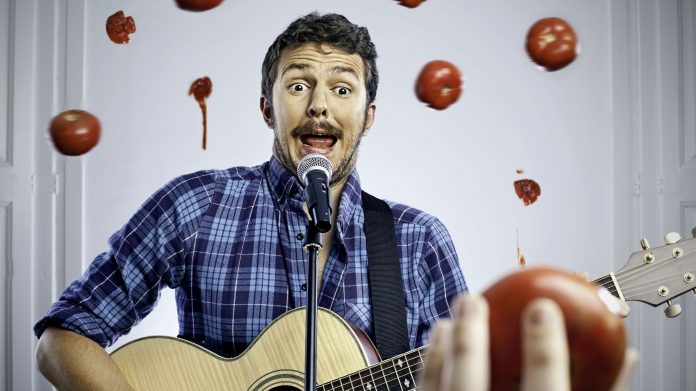 We as the audience laugh at these contestants who are convinced that they have what it takes to be the next American Idol whilst making our ears cringe at the sound of their totally off-key and horrific singing. Holy screaming cats, it seems that sometimes the tone deaf are not aware of their own musical limitations.

What is Tone Deafness?

So what is tone deafness and how is it acquired? People who are tone deaf can’t hear differences in pitch or follow even the most basic tunes. People with amusia may have no problem following and repeating rhythms but cannot detect and discern pitch. Tests have found that only one in twenty people is truly tone deaf. Many scientists think that the cause of amusia is neurological.

While there may also be a nurture component to tone deafness, research has shown that minimal exposure to music is enough to ensure that infants can obtain normal and full musical development.

There have also been familial studies of amusia that indicate the presence of a genetic component, as many of those with tone deafness have a significantly high percentage of close family members who are also tone deaf. So it seems that tone deafness or amusia may also be inherited.

Dr. Lauren Stewart is studying tone deafness or congenital amusia at the University of Newcastle Upon Tyne in England. Readers may take two music listening tests to access their music perception abilities. (It’s fun and takes about 15 minutes.) When finished the test, you can forward a link to family members who can take the test as well and help Dr. Stewart accumulate new data for her studies into the realm of amusia or tone deafness.

There is another test for tone deafness at the National Institute on Deafness and Other Communication Disorders. Twenty-six snippets of common tunes are played and the listener must decide if the music is played correctly or not. This NIDCD test only takes a few minutes and it’s also fun.

There is currently no cure or effective treatment for tone deafness, but studies show that most people with amusia generally are not too concerned about their seeming disability.

If amusia is an inherited condition there may be no way to reverse or correct the musical deficit in the tone deaf.